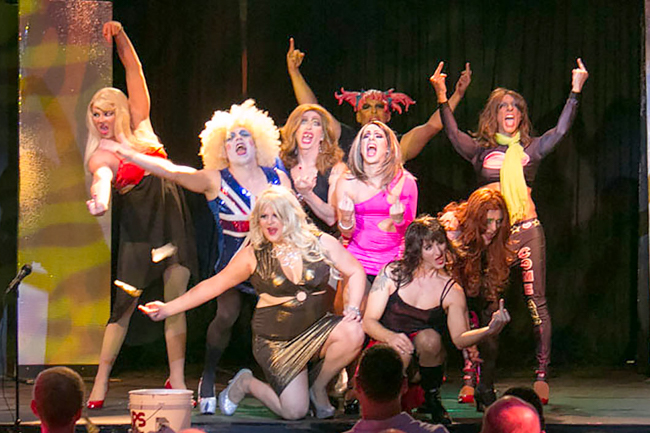 What is Atlanta’s only live-singing, sketch-comedy drag troupe to do when a year of upheaval threatens their uproarious signature show? The Ho Sho looked at it as an opportunity.

“These gals could have tossed their hands up, said ‘oh well,’ and chosen not to perform, but that’s not who they are,” said Ho Sho producer Dan Dunlop. “My hope is that the audience will be exponentially wider as a result of the Ho Sho being broadcast, and as a result, they will be able to raise greater awareness for their charitable partnerships.”

Loyal fans of the annual show expect high quality performances, raucous hilarity, topical themes and a bawdy blast. The once-a-year characters are ready to shine with virtual performances on Oct. 8, 9 and 10.

A first hint of the Ho Sho vibe to the uninitiated is this year’s title, Ho Sho: Erection Year. Drag names like Tilly Kummz and Georgia O’Kweefe offer another clue. Still, with performers from Atlanta Gay Men’s Chorus and a fulltime production company behind it, silly fun comes with a high entertainment value.

“The show is worthy of a much wider audience, and maybe the pandemic opportunity to shift to a broadcast format could be the thing that propels them to a  national audience,” Dunlop said. Since the troupe only performs a few times a year, when they do have a show, it is well rehearsed and very memorable.”

As “Erection Year” suggests, the cluster of corona and current events that make up 2020 are on the table. That includes a take on the pandemic and the election that “let’s just say… in a way that you’ll never see on Fox News,” he hinted.

“Plus, after months of isolation, these girls are loaded with material like never before,” Dunlop added. “And Jerry Falwell Jr., you’re not off the hook just yet!”

“I know many of these performers through the chorus and have an admiration not only for their musicianship and friendship, but I also have enormous respect for the labor of love that they put forth for various charity groups around the city,” Dunlop said. “Through the years, they have raised thousands of dollars for others, and it is a personal calling for me to be a part of that effort for this year’s show.”

Even though it’s virtual, audiences can expect the best of what makes Ho Sho so memorable. The live-singing format, nearly unheard of in local drag, provides an opportunity to customize lyrics for each act.

There’s simply no other place in Atlanta to see in-the-moment “comedy set to live music and entirely born out of the wit and creativity of some very accomplished musicians,” Dunlop added.

That’s not to say there aren’t changes and challenges in an online world. Previous years’ offerings relied on heavy audience interaction. Still, with Dunlop Productions behind the camera, there are some great surprises in store.

“I don’t want to give too much away, but they found another clever way to position the show this year and it is absolutely hilarious,” Dunlop promised. “The opening group number is so funny and so clever, and it just continues from there.”

In short, buy tickets for the streaming Ho Sho and settle in for a great show nestled comfortably during busy schedule of local LGBTQ events.

“If anyone is looking for something fun and memorable to do on virtual Pride Week in Atlanta, this is a must do,” Dunlop said.  “Even though we may not be ‘together,’ we are united in spirit and hearts. Stay strong, stay encouraging of one another, respect our differences and embrace our uniquenesses. Happy Pride!”

A version of this calendar ran in Q ATLus magazine. Flip through the full print issue online here: