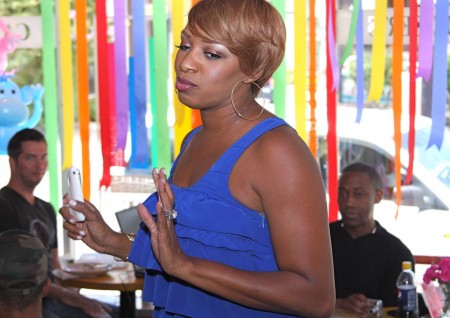 NeNe Leakes stormed into Outwrite Bookstore & Coffeehouse on Wednesday, bringing with her the outspoken style that has earned her legions of gay fans on Bravo’s “The Real Housewives of Atlanta.”

The second season of the show recently started and Leakes is on tour pitching her book, “Never Make the Same Mistake Twice.” Later in the day, she appeared at the Buckhead Barnes & Noble.

Her stop at Outwrite was unofficial, though it did attract a few dozen fans to the store for the early-afternoon appearance. Leakes shook hands, dished about the show — denying she pulled Kim’s wig in a confrontation that aired over two episodes of the show — and signed several copies of the book, depleting the store’s stock.

And what of her gay fans?

“I think gay men relate to me because I’m tall, I’m outspoken and I look like a drag queen!” Leakes tells the Atlanta Journal-Constitution’s Peach Buzz. “I mean, I wear six-inch heels. Gay men just love fabulous women and I love them right back.”