Now both doctors qualify this by saying they don’t want to give the impression that a BB top is safe, but they also concede that gay men have a misconception that oral sex is safe, when the fact is there are documented cases of HIV transmission through oral sex, a fact that some gay men still want to deny. Both don’t encourage BB topping or unprotected oral sex.

I think the gay community needs to be properly informed. While the risk of BB topping is extremely low, in reality it’s no riskier than unprotected oral sex.?
— Straightening you out 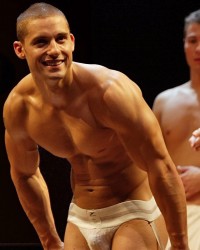 You need a new doctor and better friends. Any doctor who says that the risk of topping without a condom is equal to giving oral sex needs their license to say “beautician,” not “Doctor of Medicine.”

As long as there are no scrapes, cuts or abrasions in your mouth, the risk of giving oral sex is minimal. But the risk of topping somebody who’s positive is much greater, even if you don’t have any sores or cuts on your penis.

Here’s why: As you thrust, the urethra is stretched open, allowing fecal matter, blood particles and other delicious goodies to enter. As you pull out for the next thrusts, the urethral opening closes, pushing all those goodies deeper, possibly scratching or tearing the urethra and creating a transmission route.

Contrast that to giving head. Somebody thrusts himself into your mouth. If there are no scratches or abrasions in either his penis or your mouth, how can the virus enter your bloodstream? There is the possibility that it could be absorbed through the soft lining of the mouth’s membranes, but there’s also the possibility that I’ll go on a date without putting out. The odds are about the same: next to nothing.

Let me tell you a parable that speaks to your doctor’s prominent stupidity:

During the debt ceiling talks, House Speaker John Boehner sent President Obama a letter. Obama opened the letter and it contained a message that was obviously in code:

Obama couldn’t figure out the code, so he sent it to the CIA. They couldn’t solve it, so it went to the NSA, the FBI, MIT, NASA and finally to the Secret Service. Eventually, they asked an elderly WWII code breaker. The guy took one look at it and said, “Tell the president he is looking at the message upside down.”

That’s a long way of saying your doctor is looking at HIV research upside down. Hand it to him right side up and get a new doctor.