Having sex in your parents’ house gets you going, but the boyfriend? Not so much. Freeing his inhibitions might be easier with a few tips on how not to get caught in the parent trap. 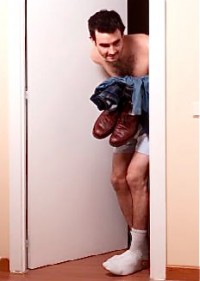 My boyfriend and I are planning a trip to spend time with our parents. It sounds pretty normal, but the thing of it is that as soon as we get into bed, I want to jump him like an animal.

I don’t know if it’s the sneaking around or the “I’m so bad” part of doing it at our parents’ houses, but it has been the best sex we’ve ever had.

My boyfriend’s not as into it as I am. I’ve actually had to force him to do it a couple times, but once he gets into it, it’s amazing.

How can I get him past his inhibitions so we can get down to business?
–Daddy Complex

Dear Daddy Complex:
If you want him to drop his drawers, you have to raise some issues. Like how not to get caught. Talk to him about soundproofing the guest bedroom. Here are a few tips to keep the nosiest of parents at bay:

Use a towel to “weather-strip” the bottom of the door

Bring a portable CD player and place it right behind the door. If the bed squeaks a lot, play Britney. If he moans a lot, play Barry White.

Put a chair under the doorknob if they don’t have a lock.

Run the shower. If they have especially thin walls, they’ll hear the water running in the pipes instead of you laying pipe.

Of course, I’d also consider the time-tested, zipper-opening strategy called liquor. It wipes away inhibitions like a washcloth. One or two beers, and you’ll be under his belt in no time. Be cautious, though. Alcohol can lower inhibitions, but it can also lower performance.

The point is to address his concerns. You take care of his worry, and he’ll take care of your little fetish. Once he realizes you’ve practically eliminated the chance of parental humiliation, the only time you’re going to hear him say, “Don’t” is right before he says, “…stop.”