I’m in my 20s and prefer men my own age, but I can’t get any of them to pay attention to me. Are all younger guys attracted to older men, or am I missing something—or worse, doing something wrong?

I’m in my mid-20s, and I want to hook up with people my own age, but the mother fuckers pay me no attention.

What can I do to attract men from my same age group?
–Ageless & Evergreen

Dear Ageless:
You think most young guys are into older guys? I don’t know what planet you’re living on but you must have hitched a ride on the Space Shuttle to get there. 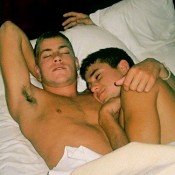 But I digress. Fast forward to your computer to see how things have changed. Point your browser to any dick/date site–they’re usually in that order—and take a look at the profiles. How many 20-somethings say “Older only?” Probably about five percent.

So why are you missing out on the other 95 percent? Maybe because you’re such a jerk that even your smooth skin and unlined face scares the hell out of people your own age. I mean, calling the guys you’re attracted to “mother fuckers?” I’d hate to hear how you describe guys you’re not attracted to.

You need to do a little self-inventory. If you could be aware of how you’re coming across to people, you’d have a great shot at changing it so you can attract the guys you want. The trick to de-jerking yourself is finding out what unconscious behaviors are making guys your age invest in jet propulsion mechanisms to get the hell away from you faster.

The best way to do that is to ask a good friend how you come across to guys you slobber over. If he’s any good, he’ll tell you the truth. And if you’re the typical friend, you’ll think he’s lying.

For instance, a friend asked me how he was coming across to potential dates. I looked at all the different colored hair all over his couch and said, “I think if you stopped grabbing their hair thug-style you might have better luck.” He didn’t speak to me for a week.