Need Wood? Why’s he online if he’s in love? 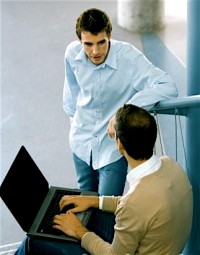 I met a great guy on a hookup site a few months ago, and things are going fantastic. He constantly tells me how much he cares about me and that I’m “The One.” We’ve even gotten tested together. We’re both negative so we’ve thrown out the condoms.

There’s only one thing that keeps me from falling completely in love—he spends his spare time checking out guys online. He swears it’s just to kill time, but I find it hard to believe you’d check your inbox every night if you were truly in love.

I mean, I kill time by playing sports, reading, playing music and watching TV. I’m grateful to the site for giving me a marriage, but now I’m afraid it’s going to give me a divorce. Help!
–Can’t think straight 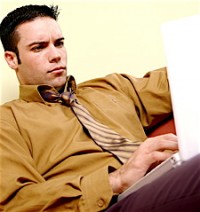 I believe him when he says you’re “The One.” The thing is, he left off the other half of his sentence: “…of many.”

Dude, you need to try on a new wig, because those bangs are blinding you. Given that you’re still in the courtship stage, I think it’s a safe bet that he’s a tickin’, cheatin’ time bomb.

However… he’s innocent until proven guilty. Truth is, people use online sites for different reasons—to hook up with meat-starved nymphos, to date guys you can take home to mom, or to feed a raging ego. You’ve gotta figure out if he’s online to go into a Bathhouse, a Love Shack or an Ego Depot.

Assuming he’s kept his site membership because he wants to score like an armed bulimic in a pastry shop, you could give him an ultimatum: Your dick or his membership. The problem with that approach is that you haven’t solved anything. You’ve just made the problem go underground.

Yes, it feels good to draw a line in the sand and stand up for your values, but make sure you’ve got your eye on the doughnut and not on the hole.

Meaning, your problem ain’t the site; it’s him. You can force him to cancel his membership, but if he’s on it to cheat, you’ll still be married to a guy who’s going to cheat. He’ll just find some other way to do it.

Resolving the problem requires blame-free conversations about his motivations, your fears and the rules that can manage both. Here’s how to do it:

Express your fears, not your accusations. Assume he’s online because he likes good-looking strangers sprinkling Miracle-Gro on his ego. Say something like, “I believe you when you say that you’re not on here to have sex with other guys, but I’m afraid it’s only a matter of time before somebody irresistible comes along and you end up doing something that’s going to harm our relationship.” Then talk about sex outside the relationship. Does he want it? Do you? If so, make up rules you can both follow.

Put him in your position. Here’s the most effective question you can ask him: “What would you do if you were me?” You might be surprised at his answer.

Go online together. Not to spy, but to share. If he’s cheating or planning to cheat, he’ll freak out. If he isn’t, then he’ll give you his user ID and password and welcome you into his fantasies.