Need Wood? What do you have a taste for?

Knowing what you want is the first step. Knowing how to ask for it—however uncomfortable you think it might make people—is the key to success. Ask and you shall receive.

The right smell is 10 times more effective than Viagra for me. I’ve picked up great looking guys online, but if they show up like they usually do, smelling of soap and baby powder, sorry, but my stick goes south.

Before meeting, I’ve tried to tell them indirectly that I don’t like soap smells, but usually they run away as if I’m going to show up smelling like I smeared a Limburger on my crotch.

Am I deviant and abnormal? Will therapy cure me of this? It seems that everybody has been brainwashed by a ’50s housewife mentality–everything in its place looking pretty.

How can I tell guys what I like without having them run away?
— Sniff, Sniff

Dear Sniff-Sniff:
You’re scaring people off because you haven’t struck the right tone. Too direct (“I love nicotine-stained underwear!”), and they’re going to hit the delete button like a woodpecker. But too indirect, and they’ll do the same thing.

Why? Because the absence of information forces people to make negative assumptions.

If you “hint” at liking natural smells without spelling it out, they’re going to think, “Oh, my God. He’s going to make me take a dump and eat the cashews out of it.”

So, be straightforward but diplomatic. I wouldn’t wax rhapsodic about the joys of smelling ripe armpits in your profile. I’d say something more like, “You know how men get turned on by what they see? I get turned on by what I smell. So, my perfect sexual experience would be for you to show up showered without scented soap, cologne or deodorant. Or unshowered, fresh from the gym.”

Ask and you shall receive. 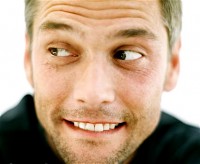 I’m a hung top infatuated with big dicks. Trouble is, most hung guys are tops.

So I either meet someone who’s hung but sexually incompatible or someone compatible but not hung. Help!
–Big Dick Daddy

Dear Big Dick Daddy:
If you’re going to generalize, then at least be somewhere in the neighborhood of truth. Right now, you’re three planets over.

Guys who pitch but don’t catch do it because a) They like pitching, b) They don’t like catching, and/or c) They have a few hangups.

So you’re most likely to be the active partner if you’re the older guy in the relationship, the richer guy, the taller guy, the bigger guy, the more powerful guy, or the guy most concerned about his “masculinity”–not because you have the bigger dick.

I know my generalizations are pockmarked with exceptions, but at least my views orbit Planet Earth, not Saturn.

To further discredit your assumptions, think about this: Being hung can handicap you. I mean, if you come at somebody with a regulation bat between your legs, I don’t know too many guys whose sphincters are going to wink and say, “Have a seat.” They’re more likely to point to your schlong and faint.

Another thing, Tripod. The reason you’re so sexually frustrated is that you’re bedroom repertoire is about as wide as a pubic hair. What’s wrong with two guys who prefer topping going home and having oral sex?

Your love life is going to go bankrupt if fucking is the only currency in your sexual economy.