Need Wood? Turn him from unsure to intrigued

I think I’m in love, but when I try to bring it up, he says he’s unsure. I’m on the hook while he keeps me in check by not committing. How do I get this guy to see the light and date me exclusively? 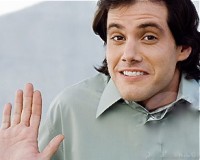 I’ve been dating this cute, cute, cute hottie that I’ve fallen head over heels with. The problem is, he doesn’t feel the same way I do.

He calls and often initiates the dates, so I know he likes me and wants to go out. But it’s been four months now, and he’s still waffling.

“I’m not sure what I’m feeling for you,” he said. “I haven’t totally worked out my feelings about my ex or this other guy I used to be fuck-buddies with.”

How do I get this guy, who I know is my soul mate, to see the light and date me exclusively?
–Puzzled yet Pissed

Christ, I hate questions like this because it forces me to think. It’s so much easier to write about giving good hand-jobs.

Look, my advice is not going to be pretty, but if you follow it, you’ll clamp the old ball and chain on him if he’s clamp-able at all. The way you get the guy is to stop trying to get him.

Nature abhors a vacuum. If you create a space between you and him, one of two things will happen: He’ll step forward to fill it in, or he’ll step backward and make it disappear. Either way, you’ll know.

Create that space by doing these three things:

No talking about the relationship. The last thing a confused guy wants to hear is that you’re in love with him. It’s not a matter of being dishonest; it’s a matter of being realistic. Is the guy ready to hear your declaration of eternal love? No. Then why say it? Is he going to support you when you break down and blubber on about how in love you are? No. Then why say it?

Honesty in an “asymmetrical” relationship is toxic. I’m not saying lie; I’m saying postpone. You can have all the heart-to-hearts you want once you hook him, but you have to hook him first.

Never call him. Call him back but never initiate the call. Why? Because you have to give him the chance to miss you. Plus, it disorients him. He’s used to you calling all the time, and now you’re not.

Be happy when he calls. Keep it light, funny and entertaining. No guilt trips, no sticky emotional dialogue, just flat out fun. Guys confused about their feelings need relief, clarity and simplicity. Offer him that, and you’re well on your way to an engagement ring.

This will frustrate the hell out of him. He’s used to using his ambivalence to control people, but suddenly he’s not controlling you. The only time he gets to see or talk to you is if he initiates it.

The question on his mind will be: “If he likes me so much why doesn’t he call?” And if he’s smart, he’ll figure it out: Because even though you’re in love with him you won’t give up your dignity and you refuse to revolve your life around him. All of this translates into respect.

Suddenly, you stand above the rest because you’re not caught up in his drama. In fact, he’ll start thinking he might lose you. The other guys are making demands, blubbering about their feelings, wanting commitments and you are the only one who offers tons of fun. No demands, no expectations. I’d marry you. Who wouldn’t?