Need Wood? The art of the sexy handshake

READ MORE | Catch up on all the Need Wood? columns on Project Q I’ve tried changing the way I shake hands but always get some random comments. Bottom-line it for me: What’s the best way to shake hands when you first meet somebody you’re interested in? Hey Mike!

I’ve been told that I shake hands like a Viking. When I softened it, I was accused of shaking hands like a limp Tilapia. Then I changed it again, and somebody said I shook hands like a dog, whatever that means. Bottom-line it for me: What’s the best way to shake hands when you first meet somebody you’re interested in? --Palmer Dear Palmer: When most guys think about the body language they should use in bars and parties, they pretty much think that as long as they’re not frowning or crossing their arms they’re OK. But gay body language—the subconscious, nonverbal communication that gay men use to signal their attraction—is far more complicated. It involves gestures, postures, even what you wear. 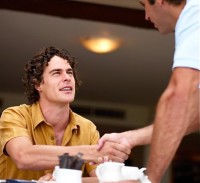 Perhaps the most powerful aspect about body language that gay men need to pay attention to is touch. A simple handshake can up your odds of getting a man, a date or a phone number. A handshake is the first time he’ll touch and feel your skin. What kind of physical impression do you want to leave him with? Consider how you go into judgment over-drive when somebody shakes your hand, and you’ll see why it’s so important for you to get this right. Let’s say your hottie extends his hand and you shake it. What do you notice? The size, the shape, and the pressure he uses, whether his skin is soft or rough, warm or cold or dry or sweaty. You’ll probably also notice whether he has clean nails or bites them—all of which you have an opinion about. A handshake doesn’t just leave a physical impression; it communicates an emotional one, too. If you’re not careful, you can come across as a selfish prick, an ass-kissing suck up, a needy little barnacle or a toss-your-head snob who’s six feet above contradiction. None of which will get you laid or land you a phone number. The most important feature of a handshake isn’t the pressure of your hand but the angle of your palm. The more you turn your palm face down the more you’ll come off as an overbearing control freak. You’re literally and symbolically taking the Upper Hand, which inevitably results in getting the Back of His Head. At the same time, the more you turn your palm upward the more you’re going to be perceived as a bumbling Mr. Magoo. You could split the difference and keep the edge of your palm completely vertical to the floor, communicating equality. That’s perfect for business, but do you want to sign a contract or make contact? Go for the handshake that studies show create instant rapport: Palm perpendicular to the floor, opened by ten degrees. Ask Barack Obama about that handshake. It’s the only one he uses. Which brings up an interesting point: Sexy male body language is the same as friendly male body language. The handshake that makes you appealing in a gay bar also makes you most appealing at work. The same handshake that helps increase your attractiveness in the gay dating world helps you increase your influence in the business world. So pay attention, and you’ll be able to kill two birds with one handshake.

Contributing blogger Mike Alvear is an Atlanta-based columnist, author and TV personality. Dating life in the dirt? Download his ebooks, "Meet the Hottie in the Corner," and "Attract Hotter Guys with the Secrets & Science of Sexual Body Language." Have a question for Need Wood? Just {encode="[email protected]" title="send it in"}.