Even if we all agree that everyone should disclose his HIV status to potential partners, let’s admit it’s difficult, and that only you can protect you. There’s no use being flabbergasted if you never directly asked the question.

I met this guy I’m really hot for. We had a blast talking, and when the subject of sex came up, I told him I was very concerned about safe sex, and that I was terrified of AIDS. He basically clucked and agreed it’s always good to play safe and get tested often.

Later that night we had sex — safe, of course. Same with the next night. The next day he said, “Well, I kind of skirted the HIV issue — I’m positive.”

I was stunned. Yes, we used condoms, but shit happens in spite of using condoms. A friend told me that since I did not actually ask the question “do you have AIDS,” he was OK not to tell me. He swore he’s on meds and is “undetectable.”

I am not sure I can believe him, because I thought our first conversation was specific enough, and his later comment, “I skirted the AIDS issue,” is an admission that he was, in effect, lying.

I am preparing my “this is over conversation,” but I am interested in what you think. While he is a sweet guy, I just don’t think I can ever relax and have sex with someone I know has AIDS. Am I wrong to feel the way I do?
–Anxious About AIDS 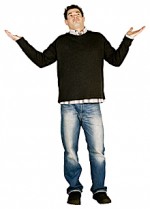 There are so many things wrong with your e-mail, I hardly know where to begin. How about your ridiculously ignorant confusion between HIV and AIDS? Do not use the terms interchangeably.

It’s like calling you a “stupid idiot.” They are distinct but related conditions. “HIV” stands for “Human Immunodeficiency Virus.” “Stupid” stands for “Not Asking Somebody If They’ve Got HIV.”

“AIDS” stands for “Acquired Immunodeficiency Syndrome.” “Idiot” stands for “Having Sex Without Asking Him His Status.”

Most Americans with HIV don’t have AIDS, thanks to meds and other treatment options, so quit confusing the two acronyms.

Now, let’s address I’m An Idiot, Part II. Are you wrong for feeling the way you do? Yes and no. You have a right to be angry that he didn’t disclose, but where’s the anger at yourself for not asking?

You’re both guilty. But I think you’re a little guiltier.

You’re blaming someone else for not doing your job. You’re concerned about keeping yourself safe, but not enough to ask a simple question.

I could simply tell you to be direct when you want to know somebody’s status and be done with you. But how about something straight from the horse’s mouth?

Here’s an e-mail from somebody else who wrote me that I received, ironically, the same day that I got your question:

Hey Woody!
I get hit on a lot online. Guys will outright ask to blow me. The problem is, I’m HIV-positive. I’m open to playing with a negative guy, though I don’t normally serosort.

But no one ever asks me my status! I always have to bring it up.

I have my HIV status listed as “Ask Me.” Don’t these guys ever think about what “Ask Me” means? I am literally inviting them to find out, but they can’t be bothered.

My question is, why are negative guys so stupid?