Tops beware: some bottoms aren’t ready for what you’re offering. Two letters this week need to know how to ask, suggest and flat out say that he needs to clean up his act before you can say, “bottoms up.” 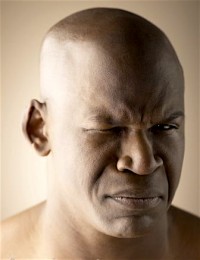 A lot of guys I pick up haven’t cleaned or douched before I top them. I have a pretty nice looking member, and sometimes a bottom gets too eager and leaves his calling card on me.

Now, I go soft at the sight of brown lining a guy’s hole or on my condom-covered penis. Sometimes I suggest we play in the shower, or ask if he needs to take a shower. But sometimes the date’s answer is that he’s “fine” when he isn’t.

Asking a bottom to shower isn’t as simple as it may seem– and particularly inappropriate if he’s the one who’s hosting. What’s a tactful way to ask somebody if they’ve douched?
–No Surprises

Dear No Surprises:
What kind of skanks are you bringing home? Most guys know the potential embarrassment of leaving tire tracks, so they’ll clean up or decline to be entered. Your guys don’t seem to give a crap.

Of course, it could be inexperience, not apathy. Most experienced guys have the good sense to say, “Not tonight, dear, I’m a ticking shit bomb.” Or something like that.

But inexperienced guys, especially if they weren’t planning on bottoming that night, might not say anything. They might suspect they’re not “fresh” but still play the odds with you. Or they may think that rubbing a little extra soap in the area earlier that night will keep the muds at bay.

Either way, inexperienced guys are the least likely to voice their concern, especially if they don’t want to miss out on a sausage-sitting opportunity.

And here’s the thing–experienced or not, douched or not– accidents happen, so don’t freak out. After all, it’s just crap. Don’t act like it’s some bio-hazard that’s going to grow you a third eye.

The solution? Ask, don’t hint. In a playful but emphatic way. Rub yourself on the outside of your date’s bat cave and say, “Are you prepared for this kind of sex, or should we do something else and wait for another time?”

If you wanted to be more direct–and judging by the blockheads you bring home, you do–you could say, “Is your backside clean enough to have sex, or do you want to wait for another time?”

If they say they’re as clean as a nun’s conscience and you get hamburger helper anyway, stay calm. Say, “Don’t worry, it happens to everybody at some point. The best way to prevent it is to douche with plain water.”

I’d rather lick spoiled lunchmeat than a hole that hasn’t seen soap in three days! How do I ask my partners to scrub the poop deck before I slide my tongue around it?
–Tongue-twister

Dear Tongue-Twister:
Unlike “No Surprises,” the guy whose dates can’t keep his sheets clean, you have the luxury of suggesting a shower together. You can say, “I want to lick you everywhere and it’ll be a lot more fun if we’re both squeaky clean.”

Think of it as preparing your own feast.

And speaking of preparation, make sure you’ve had your Hepatitis A and B shots. The main route of infection is contact with feces–even particles you can’t see or smell. It’s a bummer, but you gotta do it or you’ll be pronouncing “shit” with 4 “e’s.”