After a hot and heavy make-out session, he declined to have sex. I hauled off and smacked him to the ground. Why are so many guys such prick teases, and how do I keep my anger about it in check?

Last month, I met some flight attendant who regularly flies into my hometown. We had dinner go up to my place after where things got hot and heavy.

We’re kissing, scratching tonsils with our tongues and our hands are all over each other.

I make my move, and I guess he gets insulted that I tried to board him without the proper ticketing or something. He was like, “I don’t have sex on the first date.” I’m thinking, “Who is this Winged Whore kidding? This is a hookup, not a date!”

So I get forceful. I was like, “Nobody meets a stranger online without wanting sex, you fucking Air Mattress.” And with that, I hauled off and smacked him to the ground. I would have fucked him right then and there, but luckily I came to my senses and just threw him out of the apartment.

So I have two questions: First, why are so many guys such prick-teases? Second, how do I keep my anger about this in check? There’s something about a guy refusing to have sex after a heavy make-out session that makes me go berserk.
–Mad as Hell 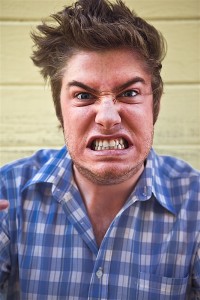 Why are all these guys such prick-teases? Because they’re going out with such a prick.

If I were the Sky Witch, I would’ve opened the emergency door at 30,000 feet and pushed you off. And if that didn’t work, I would have jumped out myself.

Clearly, you’re doing something wrong if you can’t get a flight attendant to fuck you. I mean, one kiss and it’s heels-to-Jesus with those guys.

The reason guys leave you boiling at the bedpost is because, like a fart in a perfume store, you have an odor of entitlement that stinks up the place. Nobody owes you sex even if they’ve kissed you or fondled your wallet at dinner.

Here’s why I think you’re doing it: You’re a spoiled little shit who’s been catered to all his life. You’re not used to people saying no to you because you’ve always gotten what you’ve always wanted. Like a two-year-old, the word “no” enrages you.

Make no mistake about it; you have a serious problem. It’s not unreasonable to want sex after a date, even to anticipate it. But the appropriate response to being denied sex is disappointment, not rage.

You need a therapist to figure out why sex is the only thing that validates you with other guys. Their company, their kisses and their attention don’t seem to mean shit to you. Only their willingness to have sex satisfies you.

If you’re not willing to get therapy, then I have two options for you:

Wear a red neon sign over your head that blinks “Put Out or Get Out.” At least that way your “dates” know what they’re in for. And, no, you can’t have mine. Get your own.

Make an attempt to change yourself. Ask yourself why you’re so angry. Learn a little empathy. How would you feel if you changed your mind about somebody and they tried to force you to have sex?

As a formative exercise, ask guys out and you be the one to decline sex. Learn to enjoy a man’s company whether he puts out or not.