I’m in love with my boyfriend, but the lack of sex ever since he went on antidepressants is killing me. Why is his drive so low and his tire so flat? More importantly, what can we do about it?

My boyfriend has been on antidepressants ever since a traumatic event, and it’s zapped his libido. The weird thing is that he wakes up with a hard-on but he won’t let me touch it!

He won’t talk to his doctor, and on top of that, Viagra and its little varmint cousins don’t work for him. I’m in a loving but sexless relationship. Help!
–In love/horned out 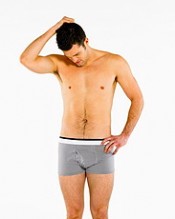 Antidepressants are a deal with the devil: You trade a piece of ass for peace of mind. Over 60 percent of people taking them report sexual side effects, including weird-feeling erections, which is why he doesn’t want sex even though he gets hard.

So why do antidepressants do to your sex life what Charlie Sheen did to his career? Serotonin is ice cream to the brain. It makes you slurp with happiness. Antidepressants like Prozac, Paxil and Zoloft increase the level of “ice cream” by altering its natural flow out of the brain to nerve cells. But the “blockage,” if you will, also stops or suppresses a chemical crucial to sexual desire: Dopamine.

The first mistake your boyfriend made was taking antidepressants without getting therapy. You raise your treatment success by as much as 50 percent if you combine therapy with drugs.

The second mistake was staying on a drug that completely zapped his desire. He needs to experiment with other antidepressants. They all have a slightly different formulation, so they’ll affect people differently. If none of the new SSRIs work, here are your options:

Take a drug-free holiday. Stop taking the pills Thursday through Sunday and try playing “Hide the Salami” on Sunday night. It’ll take a longer holiday if you’re on Prozac because its “half-life”–the time it takes for half the dosage to course through your blood—is about a week. Remember, always consult your doctor before changing your regimen.

Lower the Dosage/Up the Therapy. Reduce the standard daily dose by half and start going to a therapist. Here’s the cheapest way to lower the dosage: If, say you’re taking Prozac at 20 milligrams per day, don’t get a new prescription for 10 milligram pills. Just cut the 20-mg pill in half. No sense giving those pharma bastards a dime more than you have to.

Try the older class of anti-depressants. Ask your doctor about Tricyclics and Monoamine Oxidase Inhibitors.

Volunteer for new antidepressants. Ask your doctor or look at some of the ads in alternative papers seeking test subjects for new depression medications, https://neurofitnessfoundation.org/xanax-alprazolam/.