Need Wood? How to turn an FB into a BF

By Mike Fleming
September 15, 2010
Add this share
READ MORE | Catch up on all the Need Wood? columns on Project Q Lately, we’ve been doing it more often and actually having decent conversations at the end of our sessions. How do I turn him from a penis attached to nobody special to somebody special with an attached penis? Hey Mike! 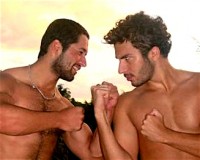 I’ve been having no-strings sex with this guy for like, two years. Every month or so, he comes over, we play hide the salami, he takes a shower and that’s about it. But lately, we’ve been doing it more often and actually having decent conversations at the end of our sessions. Well, guess what? I’m falling for him. I want to ask him out on a date, but I’m not sure how or whether I should. On the one hand, I don’t want to scare him off and ruin the chance of getting laid regularly, but on the other, I want to take this to the next level. What’s the best way of turning a fuck buddy into a boyfriend? -- Dying to know Dear Dying:

You may as well try turning Clay Aiken into a top. Fuck buddies are about being involved; boyfriends are about being committed. Think of it like a sausage and eggs breakfast—the chicken was involved; the pig was committed. Your fuck buddy’s eggs are involved, and now you want his sausage committed? Good luck. Still, it is possible to convert him from a penis that’s attached to nobody special to somebody special with an attached penis. The best way to up the odds is to play it cool. That means: No Heart-to-Heart Talks. If you call him up and say, “We need to talk,” it better be about switching lubes or trying new positions. Don’t get me wrong—you do need to talk. A lot, actually. Just not about your feelings. Figure out what he likes outside the bedroom and bring it up. You need to establish a bond with him that doesn’t involve sex. Invest in Bottle Openers. You want him as loose as your morals and the best way to do that is to ply him with liquor. You don’t want him just listening—you want him talking. And alcohol will make his mouth as promiscuous as Paris Hilton’s publicist. Start the pouring before you head for the bed or after you’re done. The point is to get to know each other better. Don’t Ask Him Out; Get Him To Stay. Do something that’ll make him stay longer. Show him a scene you taped from “The Daily Show,” for example. Your relationship with him has been completely sex-centered, so start centering it somewhere else. If there’s a spark during the “extended stay,” he’ll hang around so long he’ll have to stay over. Then you’ll have a real problem on your hands: What to cook for breakfast. Be Funny. Remember, laughter is the Vaseline that makes ideas penetrate better. The idea in this case is for him to see you as marriage material. Make him chuckle, and you’re halfway up his leg. Make him laugh and you’re halfway up the aisle. Fuck Him Senseless. No, really. Don’t forget why he’s there. If you start replacing sex with conversation, you’ll just make him say “No” in eight different languages. Don’t replace sex; add to it. Don’t Force it. If he doesn’t respond, if he finds excuses not to come early or stay late, or if he won’t even take a beer when he comes over, then take a fucking hint! Game over! At that point, you’ll have to decide if the pain of seeing him will be worth the pleasure of screwing him. And believe me it will be painful. Nothing hurts like unrequited love. Well, unless you’re getting topped by a guy who doesn’t believe in lube.