READ MORE | Catch up on all the Need Wood? gay sex advice columns on Project Q

You see him. He’s so sexy. You can’t bring yourself to look at him for very long, much less talk to him. Instead of sneaking glances and going home alone, picture him as a doorway. 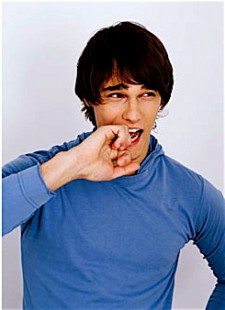 Hey Mike!
I’m no good at gay pickups. Every weekend, I go out to the gay bars and freeze every time I see a good looking guy I’m interested in. I just can’t bring myself to approach them even when I think I have half a chance.

Dear Don’t Know:
You’ve got Hot Guy Phobia: the fear of meeting attractive guys when there are no physical reasons keeping you from it. It’s also called “Approach Anxiety,” and it gives gay dating a nasty little rash that won’t go away without a little work.

Approach anxiety and deficiencies in conversational skill feed on each other. If you knew exactly what to say and how to say it, your approach anxiety would melt like I Can’t Believe It’s Not Butter.

But there’s an even bigger reason that approach anxiety rears its ugly head and keeps gay men from connecting with the kind of guys they want to date: Believing that good looking strangers are something they’re not.

Most of us see an attractive guy as a goal—something we want to, ahem, achieve. But if he’s a goal, taking the chance at approaching him has only two possible outcomes: Leave with him in your arms or with your tail between your legs.

The thing about goals is that you either achieve them or you don’t. You either win or lose, it’s black and white, sink or swim. Actually, it’s worse. When your goal is love, sex or both, it feels more like Live or Die. You either get validated by a beautiful guy or die of embarrassment from trying to talk to him. That’s a pretty high price for what amounts to saying hello.

So what’s the secret to overcoming your fear of rejection? It’s coming to a profound realization about that hottie in the corner:

What if he becomes your next acquaintance, friend, or business contact? Or the guy who points you to the sports league you didn’t know existed, the concert you didn’t know was scheduled or that restaurant that just opened. Maybe you’ll just get a great story out of the experience of meeting him. Or a funny joke.

If you’re open to all of it—any of it—then suddenly Mr. Hot, by the definition of a portal, can’t induce fear of rejection, ridicule or loss. He can only instill a sense of curiosity about what’s next.

Once you’ve redefined and realigned your perception of attractive guys, the fear of rejection goes away. But you’re still left with a major dilemma: What do you say to an attractive stranger that won’t make you sound like an idiot?

I cover that extensively in my new ebook, “Meet The Hottie In The Corner,” and will touch on it in later columns. For now, work on the law of gay attraction by changing your perceptions.

Every time you see a hottie, picture a doorway.