Need Wood? How does a top top a top?

He’s awesome. You’re falling. Everything’s perfect—with that one big catch: you’re both tops. How to get some booty now and then rather than always giving it up and feeling compromised. 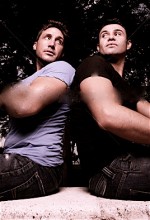 I’ve been with this guy for a few months now, and things are moving along quite nicely with one exception. We’re both tops.

We click on so many levels except that one. To avoid a stalemate in the bedroom, I’ve been bottoming every time, but I really want to switch things up.

I’ve asked him, but he won’t. Is there any way I can change his mind?

Dear Wanting:
You can’t argue your way into a man’s starfish. Try it, and the 10-foot fence around his sphincter will grow to 20. Confront him, and he’ll electrify the fence. Seduce him into it; every salesman knows you don’t go for the “close” right away.

Drop the labels. Saying something like, “I’m not going to be the bottom in this relationship” will trigger every emotional hot button he’s got about his masculinity. Instead, tell him you’re crazy-attracted to him and want to experience different aspects of him.

Use your sexual power. What turns him on about you? Your chest? Walk around the house shirtless more. The way you grunt in bed? Grunt more. The more you turn him on, the easier it’ll be to turn him over.

Emphasize reciprocity. Remind him that partners don’t just do things to each other in bed, they do things for each other.

Here’s how: Promise that as you move slowly to the Main Event (see next point) you will not try to top him under any conditions. This will get rid of his “anticipatory anxiety”—constantly being on guard that you’re going to trick or force him to bottom as soon as he lets down his guard.

Trust is a key issue. Don’t violate it, or you’ll spend the rest of your sex life on your back memorizing ceiling patterns.

The build-up. Start by simply laying on top of him stomach to stomach. Do not lift his legs as if you’re about to enter him. Kiss and touch all you want, but be on top. Once he gets comfortable with that, then advance progressively:

• Gently brush the head of your penis against his sphincter. Don’t use your hands; otherwise he’ll think you’re going to pull the old “I’ll just stick the head in” trick.

• Slowly push between his legs so that the length of your shaft presses against his perineum. The heat and hardness against such a sensitive area will flood him with pleasure. The idea is to get him used to having your member touching his Demilitarized Zone without freaking out.

• Slowly rub the shaft of your penis against his perineum in gentle thrusting motions. Basically, it’s stimulation by simulation.

The main event. After a few weeks, when you sense he’s receptive ask him if you can make love. The combination of his love and desire for you mixed with the respectful and sexy way you’ve gone about it will almost always result in a “Yes.”