Getting angry about friends who contract HIV is one thing, but writing them off for lapses in judgment is another. Why is it so hard to get some gay men to wear condoms, and what are the mitigating factors that can lead to unsafe sex?

I don’t mean to be cruel, but I’m pissed off! I’ve just had two 20-something friends turn HIV+. I feel awful for them, but at the same time, I’m angry.

I just don’t understand why they didn’t have safe sex. It’s not like they don’t how to protect themselves—they chose not to. To me, it’s a simple equation: Wear a condom.

For my own sanity, tell me, why is it so fucking hard to get people to wear condoms?
–Don’t get it

Dear Don’t Get It:

If people were any more stupid about safe sex, we’d have to water them twice a week. But you know what? I agree with your anger but not with your logic.

Follow your thinking, and you’re a breath away from saying, “If you got infected because you didn’t wear a condom, then it’s your fault and you don’t deserve help.”

Bullshit. When emergency workers pull out injured people from car crashes, do they blame the victims for not wearing seat belts? Do they refuse to help them?

The standard reasons experts give about rising infections center around Plague Fatigue and misplaced “AIDS Optimism” (believing that HIV’s manageable and a cure is just around the corner). But there’s also a few other reasons: 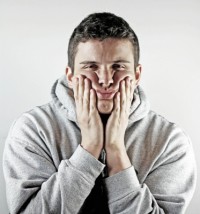 Condoms smell awful and feel worse. You know the few times you put on a condom and it felt really good? It’s because it broke. Let’s face it, who the hell wants to use those boner busters?

Condoms give your dick a flat tire. Picture this: You’ve got an erection that priests pray for, a guy who wants you to top him, and a condom. You put it on and go flaccid as a fag at a Playboy shoot. You take it off and… SCHWING! Willy’s ready for the plowing without the protection. So some do it before cooler heads prevail.

Confusion about condom use. Once, I was advising a rather dim woman who kept getting pregnant. I showed her how to use condoms by unrolling them over a broomstick. “Ahh,” the woman brightened up. A few months later, the woman’s pregnant again. I said, “Didn’t you use the condoms?” She says “Yes, every day I unrolled it over the broomstick before we fucked.” Trust me, some gay guys have the same room-temperature IQ as this woman.

Alcohol & Drugs. Your pants won’t be the only thing around your ankles if you get wasted. So will your judgment.

Stress and Depression. If you don’t care whether you live or die, condoms are irrelevant.

The Cute Factor. Guys assume that the young and beautiful aren’t infected, so they cast their condoms to the wind when they hook up with the flat-bellies.

I’ll talk about asserting yourself in vulnerable situations later, but for now, put your anger aside. Anybody who gets HIV is a victim, even if their stupidity contributed to the infection. Your friends are suffering. They deserve compassion, not criticism.