We were face to face when we fell asleep, and I was in romantic bliss. But then I started getting light headed and had to throw him off me. Why, besides the mind-blowing sex, was I so dizzy? 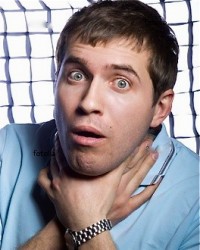 I’m dating the cutest guy right now. We have what I call “sweet sex.” You know, lots of kissing and touching.

One night the most romantic thing happened. After we were done with the deed, we cuddled and he fell asleep on top of me with our mouths about an inch apart. We were breathing in unison. It was so romantic I just wanted to die.

But then our breathing patterns somehow went out of whack. He started exhaling when I was inhaling. In other words, I was inhaling his exhalation. Well, after a couple of minutes, I got light-headed and had to push him off me, waking him up and ruining the romance.

I think it’s the sweetest thing in the world that this guy can fall asleep on me—I feel so protected—but I’ve got to turn his face away from me or I feel like I’m going to faint.

Why would I get light-headed from breathing in his breath?
–Waiting with bated breath

Dear Waiting:
You got dizzy because the carbon dioxide you breathed in from his exhalations overloaded your system. Either that, or you’re a tramp and your conscience finally caught up with your promiscuity.

I know. I shouldn’t project.

Truth is, there’s a scientific reason why you feel a little light in the loafers when you breathe in his exhalations. A quick background first: The air you breathe is roughly 78 percent nitrogen, 21 percent oxygen and 1 percent argon (don’t ask me what that is—I’m writing a sex advice column, not a science journal).

Overexposure to carbon dioxide makes you dizzy, gives you headaches, and makes it more difficult to breathe. In more extreme cases it leads to nausea and vomiting. Yikes! It sounds like one of my Saturday nights.

Not that you asked, but here’s an interesting factoid: breathing dehydrates you. Exhaled air has a relative humidity of 100 percent. That’s why so many people wake up with parched throats. Ah, to be male. You wake up thirsty for water and hungry for dick.

At any rate, the news is bad: You won’t be able to sleep with your mouths near each other unless you wear a gas mask, which, really isn’t the goal, unless you’re into that.