Two letters this week remind us of the golden rule: check yourself. Listen to the man in the mirror when it comes to what to do about three-ways, and ask the same guy what he thinks the definitions of butch and femme are. 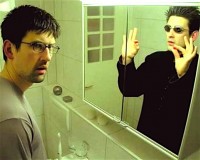 My boyfriend of only a few weeks has expressed interest in threesomes since Day One. It’s not like he comes out and says it, but it’s obvious he’s curious about it.

I’ve expressed my dislike, but I don’t want to push him away. My problem with the three-way thing is the “third wheel” phenomenon where someone almost always ends up feeling like they’re not part of the bicycle.

How do I talk to my boyfriend about my concerns without scaring him off?
–Third wheel fears

You then arrive at Milford Haven. Now what was the name of the bus driver?

Answer: You, you idiot.

My point, and I do have one, is that in the race to keep your man you forgot the most important person—You, you idiot. Your letter was filled with your boyfriend’s wishes but not yours.

What do you want out of the relationship? I can tell you one thing: It ain’t a three-way. You didn’t write to ask me how you should do it. You wrote because you’re scared he’s going to kick you to the curb if you don’t allow an extra nutsack in the bedroom.

Anybody who drops three-way hints so early in the dating game is telling you he thinks monogamy is a board game by Milton Bradley. If I were you, I’d be more worried about being a second banana in the relationship than being a third wheel in bed.

Do you want to open up a relationship with somebody whose last name you just learned how to spell? If your answer’s yes, go for it. If the answer’s no, break up now before you fall in love. If the answer’s maybe, tell him you want to try a four-to-six month period of being exclusive first.

In case you’re confused, re-read your letter. You are so in the “No” category.

My friends keep telling me how different I am when my boyfriend’s around. One friend said, “Dude…. you’re his wife!” And I realized he was right.

I don’t turn into a limp-wristed nancy boy or anything, but I generally have the nauseatingly cute “couple attitude” thing going on–in a feminine way that my friends don’t like.

I’ve become trapped in the role of the supportive wife! How do I turn this around?
–Not a Nancy-Boy

Dear Nancy:
Face it, you’re afraid of the softer side of Sears. You’re associating caring and support with a loss of masculinity. Which, in terms of bullshit, is right up there with Heidi Montag’s “natural look.”

You shouldn’t change something you like just because a couple of jealous friends give you the business. Give it right back to them.

Next time they razz you, say, “I know what you mean. If I get anymore femme he won’t be able to tell the difference between me and you guys.”