“It’s like my boyfriend is suddenly just going through the motions, if he goes through them at all. Do you think his change in sexual behavior is a sign that he’ll soon kick me to the curb?”

Hey Mike!
My boyfriend suddenly seems distant in bed. It’s like he’s just going through the motions, if he goes through them at all.

I’m so afraid that he’s falling out of love with me. I know that I should talk to him, but he’s not the talking kind, and frankly, neither am I.

Do you think his change in sexual behavior is a sign that he’ll soon kick me to the curb?
–Dead Bed

Dear Bed Head:
No, I think it’s a sign that you two mutes need to talk. The only place silence ever solves anything is in a library. 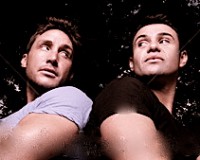 If he has changed the frequency, passion or interest in sex, it could be a sign that he thinks you’re as exciting as a zip code directory. But it’s most likely circumstances that changed his behavior in bed. Take stress. That’ll give anybody’s dick a flat tire.

I remember once working for a company that rumbled with rumors of bankruptcy. I didn’t want to worry my boyfriend, so I kept it to myself. Actually, my dick kept to itself, because no matter how many times I yelled, “Showtime, Mr. Happy!,” he just wouldn’t perform.

When I finally shared the problem and my boyfriend helped me through it (the company did eventually go bankrupt), I became my old self—a lewd, loud and lecherous horn-dog who kept calling his boyfriend by the wrong name just to piss him off.

The biggest sign that something’s wrong with the relationship is if he starts taking care of himself physically but ignores you sexually. If that’s the case, don’t let the clue bat hit you in the face: He’s fallen out of love with you and into lust with someone else.

There are smaller signs, too:
• He fakes his orgasms by spitting on your back.
• He suddenly thinks foreplay is a golfing term.
• He has to drink a lot before climbing in the sack.
• He starts acting like an underpaid gigolo.

Remember, what your boyfriend does on the way to the bed is more important than what he does in it. Is he still affectionate? Does he pay attention to you? Is he respectful? Does he want to be with you as much as he wants to be in you?

If so, then sit down and have a chat. Boyfriends shouldn’t just be all over each other in bed—they should be leaning on each other outside of it. My advice? Quit guessing and ask him if he’s stressed out about something you can help him with.

Contributing blogger Mike Alvear is an Atlanta-based columnist, author and TV personality. Dating life in the dirt? Download his latest ebook, “Meet the Hottie in the Corner.” Have a question for Need Wood? Just {encode=”[email protected]” title=”send it in”}.