One guy is six years older than the other. Another is 19 but likes ‘em in their late 20s. It’s not exactly a generation gap, but get past any issues with these tips that bring out the maturity in both of you. 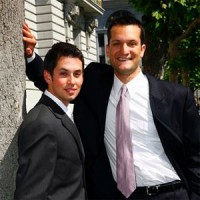 I’m 24; he’s 18. The only thing that’s stopping me from falling in love is his age. I find myself constantly lying about it to my friends. Am I crazy for thinking that dating somebody that young could actually work out?

He’s everything I want in a guy—he’s almost more mature than I am, has more goals and is more on his way to achieving them than I am. Yet, the age thing is always in the back of my head.

Also, I’m worried that he’s only holding on because I’m his “first.” To top it off, I’ve decided to move to another city, and he wants to come with me. Help! What should I do?
–Dazed and Confused

Dear Dazed:
Look, if God had said, “Let there be light!” and you were the one who hit the switch, you might have a point about the age spread, but come on! I’ve seen bowling pins further apart than your birthdates.

Why are you so hung up on his age? It’s character, not years, that defines a man.

Speaking of character, I see a giant flaw in yours. By constantly lying about his age, you’re basically telling him and the world that you’re ashamed of him, that there’s something wrong with him.

How’d you like it if he lied to his friends about your age? Would you feel accepted? Loved? Trusted? Supported? Stop lying and start bragging.

I’m a frustrated 19-year-old. I’m not into dudes my age at all—we just don’t click. I’m always told I look and act like I’m in my mid-20s, but once guys in their late 20s figure out how old I am, they ditch me and tell me to go after somebody my own age.

How can I convince these guys that I’m capable of having a relationship with them?
— Hey, 19

Or because, in pizza terms, they’ve pounded you into dough, tossed you up high and shoved you into their trick oven. The one marked, “Done.”

Now, assuming that you’re getting kicked to the curb after a while because of your age and nothing else, it means that you’re a whole lot more immature than you think. Here are a couple of things you can do to turn it around:

Invoke The “Three-Dates-Before-Sex” Rule. God, I hate this kind of chick-shit, but desperate times require desperate measures. By delaying sex, you’ll weed out or at least minimize the players who just want to get into your pants.

But more importantly, it shows self-control—something 19-year-old guys are not famous for.

Spring for the occasional coffee or movie, too. Independence is another word for maturity. So is generosity. But then, so is sucking a softball through 30-feet of garden hose. Don’t forget to spring for that when the time is right, too.