Need a hate crime? Georgia has 17 you can use 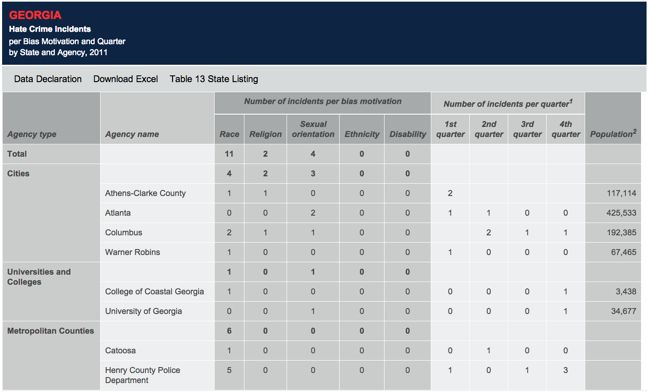 The number of reported anti-gay crimes doubled in Georgia last year, which must be encouraging news to the state’s two hate groups with a gay bent. But thankfully, the total only reached four.

That’s the takeaway from the FBI’s recent Hate Crime Statistics, which compiled data on bias crimes reported in 2011 from law enforcement agencies across the country. Some 1,508 offenses based on sexual orientation were among the 7,254 bias crimes reported in the U.S. Others include 3,465 based on race, 1,318 on religion, 891 on ethnicity or national origin and 58 on disability.

But those numbers come with a few caveats. The FBI does not collect date on hate crimes based on gender identity, though that changes in 2013, and federal law does not require law enforcement agencies to report bias crimes.

The Georgia Supreme Court struck down the state’s hate crimes law in 2004, making it one of five states in the U.S. without such a measure on the books. Since, legislative attempts to pass another measure have failed, though lesbian state Rep. Keisha Waites wants to try again when lawmakers return to the Gold Dome in January.

• Of the 4,623 hate crime offenses classified as crimes against persons in 2011, intimidation accounted for 45.6 percent, simple assaults for 34.5 percent, and aggravated assaults for 19.4 percent. Four murders and seven forcible rapes were reported as hate crimes.

• Fifty-nine percent of the 5,731 known offenders were white; 20.9 percent were black. The race was unknown for 10.8 percent, and other races accounted for the remaining known offenders.