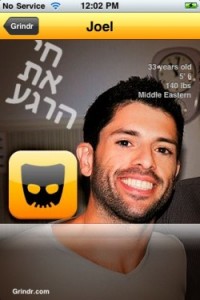 As Grindr and its creator Joel Simkhai (photo) take over the world with 500,000 gay men and counting who are looking for the nearest hookup, why not see how it does in the land of “Don’t Ask, Don’t Tell”?

About 200 yards from the Pentagon, more potential connections than the ladies could count popped up ready for some out-of-uniform action. In both houses of Congress, plenty of opportunities for gay sex, though the House being out of session dampened the possibilities on that day.

On the White House lawn? Yup. The nearest manwhore was 100 yards away. But inside the Press Room? The iPhone sounded the gaydar in such plenty that one has to wonder if there were any straight people besides the reporters in the room.

Special thanks to our former colleague and good buddy Brian Moylan at Gawker.com for alerting us to this “hard breaking news story.”

Watch the full video report from the Examiner: