My Sisters’ Room under fire for Fuel Girls show 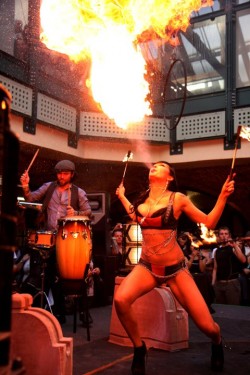 A fire-spitting act from the Fuel Girls at East Atlanta lesbian bar My Sister’s Room on Saturday during Pride is drawing heat over safety concerns and an apparent lack of permits. The London-based Fuel Girls performed at the club Saturday during the “Fire and Ice Pride Event,” but a report from CBS Atlanta says the bar lacked permits for the show and that the Atlanta Fire Department was unaware it took place.

A group of bikini clad women called the Fuel Girls, performed their fire-spitting act at My Sister's Room, an Atlanta lesbian night club in East Atlanta Village. Fuel Girls performed the weekend of Atlanta's gay pride celebration. A viewer sent CBS Atlanta an email with the link to a YouTube video showing the performance. He said he sent us the link because he was concerned about safety. CBS Atlanta investigated and found out from the Atlanta Fire Department that fire officials were not made aware of the fire show and the club did not have a permit to host the show.

When CBS Atlanta reporter Tony McNary arrived at My Sister’s Room on Wednesday to talk with club officials about the show, he was ordered out of the bar and someone inside threatened to call the police. The Fuel Girls promote themselves as “an ultra sexy, Fire Breathing, Rock and Roll, Dance and Stunt Show.” On Thursday, My Sister’s Room defended the show on its Facebook page, saying that the Fuel Girls are “extensively trained in pyro safety and spend hours before each show making sure the club is safe.”

The Fuel Girls are an international entertainment group that have been doing shows all over the world for the last 7+ years. They are extensively trained in pyro safety and spend hours before each show making sure the club is safe. Our MSR patrons are more than customers..the...y include our friends, family, partners, boyfriends and girlfriends...Their safety is our first priority. In the future, we have been asked by the fire chief to let them know ahead of time before we do a fire show, and they will send someone as a precautionary measure. Thank you so much for your continued support.

Last June, 12 people were injured when a portion of the bar’s deck collapsed. The incident prompted the club to close for five weeks. The bar lacked permits for the deck, though it was not fined after the incident. Photo courtesy Fuel Girls from London Tattoo Convention