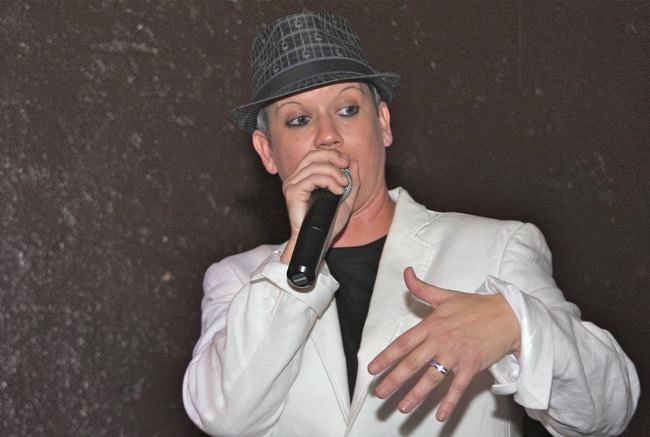 Popular emcee Chase Daniels has been a fixture at East Atlanta lesbian joint My Sister’s Room for years. In a few weeks, you can call her and partner Jami Siden the new owners. On Saturday, the couple made it official during MSR’s 3rd Annual Toy Drive Party: Longtime owner Susan Musselwhite is selling the lesbian enclave to Jennifer Maguire (aka Daniels) and Siden. The ownership change has been in the works for months; it becomes official on Dec. 31 and the torch gets passed on Dec. 17 when the bar hosts a Pass the Torch Party. “We’ve been in talks with them about this for about a year,” Siden says. “They said they were ready to pass the torch. We decided that this is where our heart was.” More than their heart is centered at MSR. Maguire (top photo as Daniels) and Siden met more than two years ago through their work at the bar. Partners operating the bar is the norm, as Musselwhite has owned the bar with day-to-day operations help from her partner, Patryce Yeiser. MSR celebrated its 15th anniversary in August, a celebration of being Atlanta’s longest-pouring lesbian bar coming during a tough economy that has caused financial troubles for other LGBT-owned businesses, including Outwrite Bookstore, and pushed the owner of lesbian bar Bellissima to hang a For Sale sign. MSR has worked through a flaming controversy, a deck collapse that closed its doors for five weeks and a move from its original locale in Decatur. When the ownership change is official, Maguire and Siden will launch an aggressive plan to reshape the venue by opening five days a week (instead of its current three), expanding hours, adding an additional bar (to take it to three), reopening square footage that hasn’t been used in years, boosting its food menu and going for a sports-inspired venue by day and keeping its nightclub feel for late nights on the weekends. Maguire and Siden declined to disclose the purchase price. Think “upscale slider bar,” Maguire says, and a lesbian take on Woof’s, Atlanta’s only gay sports bar. “The balance is kind of dictated by the games on TV. If it’s a Saturday afternoon and there are playoff games and once it’s 9, we’ll sit in that third place and when it’s 10, we’ll make that smooth transition [to nightclub],” Maguire says. Those are the biggest changes, but there are others that a casual bar patron may not notice: Maguire and Siden will also redo the sound system, improve the lighting, expand the stage and add a VIP room. There are two new pool tables and several flat screen televisions, too. “It will be a different effect but still have the feel of My Sister’s Room. But an upgrade,” Maguire says. After the bar rings in the New Year, MSR will close for six days so Maguire and Siden can put their changes in place. It will re-open under the new owners on Jan. 7, with the new menu and food offerings coming online Jan. 14. “We do have a strong community base that loves the bar. It is time to take it to the next level. It’ll be our fulltime job – we’ll be the managers of it and running the club. We’ll have our hands full,” Maguire says. Musselwhite gave the new owners her blessing in a message included in the Facebook invitation for the Pass the Torch Party.

"We are extremely proud of our longevity and are very excited to now pass the torch on to Jen Maguire and Jami Siden to carry on from here. We are unbelievably proud of what we have built and couldn't have hoped for anyone better to take the reigns! Jen and Jamie are very close to our hearts as well as stellar figures in our community. They are equipped with a wide range of experience to successfully take MSR to the next level. We share in their excitement for this new endeavor and will always be just a phone call away!"

Taking on a new business in a down economy is a risk, Maguire says, but MSR’s history shows that it can not only survive, but prosper. “One good thing that we have is a solid 15 years under Susan and she’s ran that bar successfully. It has proven to be very successful in East Atlanta, especially for us being open only three nights a week,” Maguire says. “We hope everyone likes it. It is going to keep us going strong. We hope that everyone will continue to come out for 15 years and longer,” she adds. PHOTOS: My Sister's Room lets patrons in on sale during Toy Drive Party