My Sister’s Room ‘Licks It’ for Pride [photos] 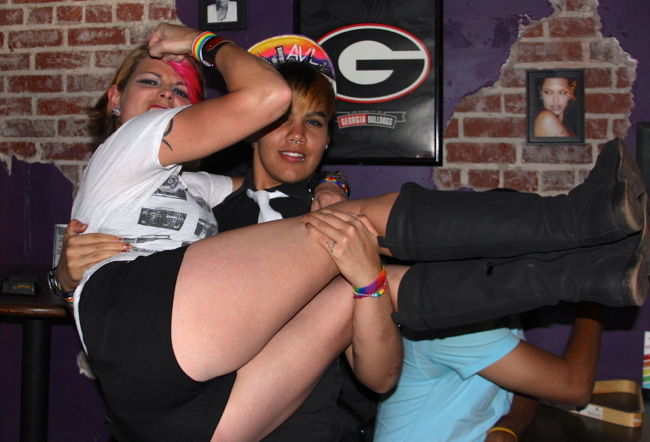 Like all of gay Atlanta last weekend, the city’s lesbian bar ramped up their slate of fun for Pride. On Saturday, My Sister’s Room played to its strengths and preached to the choir. They simply told lesbians to Lick It. It worked.

But the Lick It Pride Party wasn’t just the dancing, pool, patio, cocktails and occasional stage show that customers expect on a regular week. No, MSR upped the ante for Pride, offering up two concerts by lesbian favorites to keep the party rolling. The Maria Gabriella Band rocked the ladies early, then the dynamic duo of God-des & She hit the stage.

It was the makings of a night to remember. But it wouldn’t be Pride without more, more, more. Throw in some Hells Angels go-go girls, pole dancers, a kissing booth, and the not-to-be-missed Lick It Contest, and well, now it’s Pride.

My Sister’s Room is by no means dialing it down. The Pride weekend parties were a warm-up for the new weekly Banjee Girl Fridays with event partners Traxx Girls. On Saturdays, it’s My Sister’s Room’s new season of the MSR Drag Race III elimination competition.