Must-see art and must-attend event are the new Fabnormal 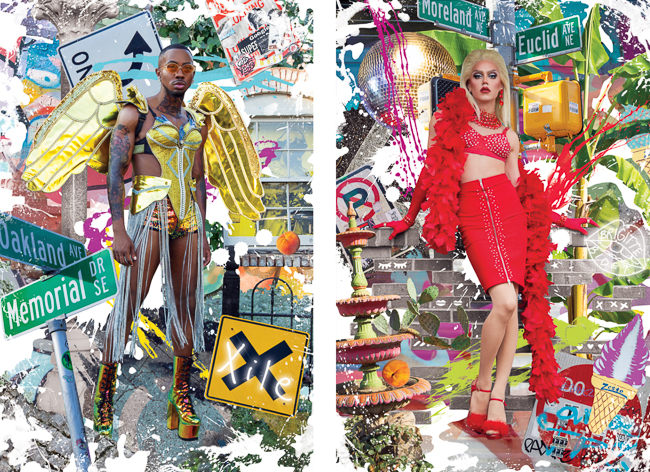 People, get ready. Fabnormal is coming, and it’s so queer and so Atlanta. The latest combination of must-attend event by Rigel Gemini and must-see artwork by his husband Cameron Lee takes a bow on Friday, Nov. 15.

The couple that brought us the alt-queer Spectra artwork and showcase last year now presents the Fabnormal collection and event as a celebration of Atlanta’s people and places. Lee’s new work presents a diverse group of local queer luminaries in digital collages with notable intersections in different parts of the city.

“My Puerto Rican grandmother used to do cutouts where they were pictures of landscapes, and they were very vibrant and colorful,” he told Q. “Collage work is a good way to bridge in many elements of an environment, a person, a society. It’s a way to pull in a lot of things to make a larger statement.”

“Atlanta has such a vibrant LGBTQ community that’s really fun and has so many different types of ways to represent itself, from political figures to artistic to nightlife,” Lee said. “I felt it was really important to focus on that, and I just wanted to get a broad range of that. I really celebrate them and feel like they need to be shown out there and for more people to appreciate who they are.”

Lee was intentional about the locations at which he chose to shoot each model. He shot Bradford at the Southwest Atlanta arts complex the Bakery.

“I chose that location because they are so pro-trans and equality first, and I wanted a safe space to photograph her that also represented the community,” Lee said.

“There’s street signs from the area, and I wanted to get that gritty fun atmosphere that Brigitte also represents,” Lee said. “She sparkles but she’s got edges that are rough.”

The Fabnormal queer art showcase is the third in Atlanta by Gemini and Lee and the first since Spectra, which Q loved — a lot. Like Spectra, the Fabnormal event features not only Lee’s latest, but work by other local LGBTQ artists as well as slated live performances from drag to vogue to a “queer raptress.”

Event mastermind Gemini will also launch his self-titled custom fragrance at the event. and a fundraising raffle will feature donations from Lexus, The Moxy, and Cameron Lee Art to benefit Transcending Barriers. The visual artists will not be charged a wall fee or commission at the event and instead will be paid.

“So often events take advantage of performers or artists, but artwork is already a passion project that’s costly for artists and takes a lot of time and energy,” Lee said. “We just wanted to create a space where everyone comes and enjoys themselves.”

“It’s about getting more eyes on the amazing work that the queer community brings to Atlanta,” he added.