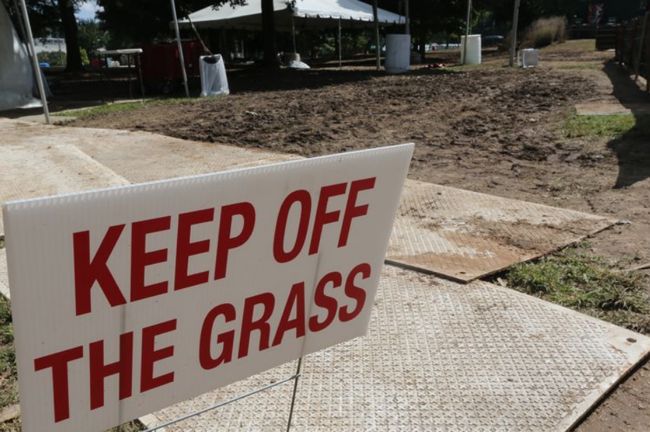 Steve Grand and his abs can't sing in this mess. Music Midtown and its more than 50,000 music fans plus some rain helped turn portions of Piedmont Park into a messy mud pit, just weeks before big gay annual events Atlanta Pride and the AIDS Walk.

Thanks, guys. And we thought the gays left behind a shitty mess after partying.

Last weekend's Music Midtown didn't quite destroy the park, but it did damage areas of Oak Hill and the Meadow. Just like last year.

“They just came in here and trashed the park,” said Ian Keith, 43, who lives in Old Fourth Ward and rides his bike through Piedmont a couple of times a week. “You have all of those people in that kind of venue, and you can’t control the rain. It is muddy and stinking.”

The conservancy acknowledged such sentiments in a prepared statement.

“As is typical with events in Piedmont, the Conservancy has and will continue to offer counsel on best use and practices for staging events … and repairs,” the statement read. “We are focused on … the process of finalizing a remediation plan.”

Thankfully, Music Midtown organizer Live Nation picks up the tab for the cleanup and park rehabilitation, like any host of a large-scale event there. But with Pride in less than three weeks, and AIDS Walk a week after that, is there enough time to heal the Meadow in time for the tens of thousands of Pride-goers preparing to swarm the park? Grand will add to his sexy with a little mud on him. But drag queens? No, ma'am.

UPDATE | Pride organizers and the city's park commissioner tell the GA Voice that the LGBT festival will go on, but may face “adjustments” thanks to the park damage.