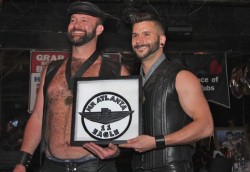 Even before Wayne Turpin competed for and won the Mr. Atlanta Eagle 2011 title last week, he knew which charities he’d support during his reign. But the gay father of two certainly didn’t know he was going to win.

“Everybody in the contest were just super nice people, and I thought at least two of them had a really good chance to win it,” Turpin tells Project Q Atlanta. “I just went into it and presented myself in a genuine, honest and open way. I was out there to have fun and see what happened.”

It worked. Turpin (top photo left, with Mr. Eagle 2010 Chandler Bearden) came out on top after strutting the stage in the Bar Wear, Fetish Gear—a wrestling singlet, boots and helmet in Turpin’s case—and Jock Strap categories. But as the contest organizers and Atlanta Eagle owners explained before the big event, becoming Mr. Atlanta Eagle isn’t just about looking hot on the runway. It’s about who the man is inside and how he’ll represent the bar in the coming year.

To that end, contestants were grilled onstage and filled out personal questionnaires in advance. Doug Weaver (bottom photo right, with Turpin) was named first runner up. The competition was the centerpiece of the three-day Atlanta Leather Pride, which celebrated the Eagle’s 24th anniversary. The weekend also featured the Black & Blue Ball (view photos).

“It’s really cool to be acknowledged and thrilling to win,” Turpin says. “But being able to benefit my charities and help other people is really the most exciting thing to me. We can donate to charities, but you have a great opportunity to leverage a title to generate more interest in events and fundraisers and thereby generate more revenue for these charities.”

As a gay dad himself—Turpin and his partner are raising an 8-year-old son and 12-year-old daughter—CHRIS Kids had already won a place in Turpin’s heart. And as Mr. Southern Bear 2010, Jerusalem House was also well on his radar before the contest. The two charities will serve as his official causes, benefiting from barbecues, special events, and even Turpin behind the Eagle bar on the third Friday of each month during his reign.

“As a father, kids mean a lot to me, so being able to help CHRIS Kids makes winning [the title] even more special to me,” Turpin says. “When things got tight with the economy, I thought, ‘How can I do something?’ So I decided to donate my time. Now I can help both them and Jerusalem House even more.”

The Eagle is also backing Turpin’s bid in the International Mr. Leather competition in Chicago over Memorial Day Weekend. Former Mr. Eagles have placed well in the contest, but Turpin says his predecessors tell him that IML will mean a lot more than another potential title.

“I’m looking forward to it a lot,” he says. “But I keep hearing so much about the experience. Whether I win or not, it doesn’t matter. The experience will be once in a lifetime, and I’ll meet friends that I’ll have for life. I’m really excited.”