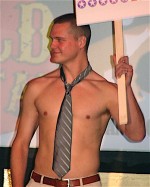 When the guys and gals of Hotlanta Softball League put down their bats and balls, they tend to raise the roof with socials and fundraisers. One of the biggest is the annual Mr. & Ms. HSL pageant on Saturday night.

“Do you enjoy having a good time? Do you enjoy giving back to the community? Do you enjoy really fun entertainment?” asks Randy Dobbs, HSL commissioner. “Well you can do all that for $5 [$10 at the door].”

The Men’s Division of HSL competes in two categories: hunks on this side, camp drag on that side. The winning contestants–one from each HSL men’s team—take home the crown and title of Mr. or Ms. HSL 2010. But what happens before that is the fun part.

“We’ve moved away from the traditional beauty pageant format,” Dobbs says. “It’s not runway categories as much as it’s several different performances and acts, and the contestants get points for having more people involved on stage.”

So at Saturday’s pageant, as the hottest of the league’s hot men strut for Mr. HSL (top photos), their drag counterparts go for a campy alternative crown (bottom photos).

HSL’s female teams Gamma and Gamma Lite get in on the fun with opening and closing drag king performances, but they do not compete for a title. Also expect a number from Ms. HSL 2009, Peaches, among others. 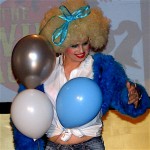 Proceeds from the event go to support HSL’s teams headed to represent Atlanta at the Gay Softball World Series. And this year, the league shares the money with CHRIS Kids Transitions Program for LGBT youth.

“What we’ve done this year is find a way to give back to the community,” Dobbs says. “We said, hey, we have a great time together, but let’s share with worthy causes. It gives what we do another dimension, more meaning.”

A 50/50 raffle during the event will also benefit CHRIS Kids.

“It’s nice, it’s cheap, it’s fun and you contribute to CHRIS Kids in the process,” Dobbs says. “It’s going to be a really good time.”

Don’t have to tell us twice. We’re in.

Catch the HSL teams playing softball all day each Sunday through the season, or catch up with them at individual and group team social events. (View photos from a recent Sunday of games.)

Coming up, that includes the Gamma Lite and Sluggers’ Trailer Trash party on Sunday and the Big Gay Amazing Race across Midtown with the Pink Cadets on June 5. Keep an eye on Project Q’s community calendar and daily Gay Agenda post for more HSL team parties and events as plans come together.