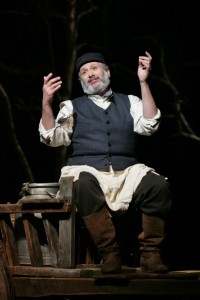 When gay icon Harvey Fierstein finished his off-type stint in “Fiddler on the Roof” on Broadway four years ago, he never realized he’d be doing it again so soon—all over the country.

And as luck would have it, Fierstein’s “Fiddler” stop in Atlanta coincides with a staging of his adapted play “A Catered Affair” at Aurora Theatre. He will make an appearance during the run of that show and address the audience after the Friday, March 19 performance.

Known best for his groundbreaking gay themed play “Torch Song Trilogy” (later made into a film) and his turn as Edna Turnblad on Broadway in “Hairspray,” Fierstein (photo, in “Fiddler”) starred as milkman Tevye in David Leveaux’s revised, non-traditional Broadway version of “Fiddler,” taking over for actor Alfred Molina in 2005.

Actor Topol was originally set to headline this current tour.

“He wanted to do a farewell tour, one final sweep, but he had health issues,” says Fierstein from his home in Connecticut. “I got a call asking [me to] jump in.” Fierstein did, and after five rehearsals was set for his first national tour.

“I’ve never done a tour, so it’s a new experience,” he admits.

This “Fiddler” tour is the traditional version of the musical, with such beloved showstoppers, as “If I Were a Rich Man” and “Matchmaker.” Leveaux’s version was considered by many to be daring—some thought too daring.

“I thought my artsy fartsy friends would like that one more, but they tell me they like this version the best,” Fierstein says.

Despite that fact that the role has been identified with so many other performers, Fierstein quickly learned that comparing himself to other actors was useless.

“You can’t do that,” he says. “I am doing the role. I have great appreciation of Zero Mostel, and the list of Tevyes can go on and on. I took over from Alfred Molina. As an actor, you give them your intelligence, your soul, your humanity.”

He sees Tevye as someone who “thinks he knows what life is. ‘Fiddler’ is a show about family. Tevye’s family is falling apart; they are going away. I like playing this character and seeing how he has to learn to adapt.”

Later this spring, Fierstein’s new adaptation of “La Cage Aux Folles” will debut on Broadway, starring Kelsey Grammer as Georges and Douglas Hodge as Albin. Ever the trooper, Fierstein will miss the opening night of the play because he will be in Washington, D.C. with “Fiddler.”

Fierstein has never been closeted, he says, recognizing he was gay at the age of 13. According to him, the gay movement has made incredible strides over the last four decades.

“The biggest battle was won several years ago,” he says. “When I was a kid, homosexuality was listed as a mental illness. It was not seen as a civil rights issue; straight people did not see it that way. Now I think that it is seen as a movement. We will win all rights eventually. We are on the verge of overturning ‘Don’t Ask, Don’t Tell.’ Gay marriage is out there, and years from now, (the fight over it) will be looked at as a silly argument.

“When I wrote ‘Torch Song Trilogy,’ gay marriage was nowhere on the radar,” he remembers. He does add, however, that while it’s taken a lot of blood, tears and struggle over the years, gay men and lesbians “can’t rest on our laurels now.”

This is Fierstein’s first visit to Atlanta. The actor collects folk art and hopes to get some shopping done while in town. And yes, he’ll take in a performance of “A Catered Affair” and do a brief talkback after the show.

His version of that musical—adapted from a 1956 film—was nominated for a 2008 Tony for Best Musical, with Fierstein in the role of the gay Uncle Winston.

Playing that role in the Atlanta version is openly gay Glenn Rainey. He is excited that Fierstein will be seeing the production.

“It’s certainly daunting to step in Harvey’s shoes,” Rainey says. “I play him drunker and angrier than Harvey, but I wanted to make him likeable too, not catty and bitchy. It was important to make him real, with depth, and my own version. In the ‘50s, being gay was an incredibly closeted time.”

Actor’s Express’ Freddie Ashley, who directs the show, says the character of Winston functions as a bit of a narrator in addition to his place in the story.

“We get to see the characters from his vantage point,” he says. “His main dilemma is a struggle to find actualization. By living as a ‘bachelor uncle’ with his sister and her family, he is prevented from fully realizing his own identity. He eventually realizes that until he can love freely, he is not whole – and he chooses to take that plunge.”

“Fiddler on the Roof” opens Tuesday and runs through March 21 at the Cobb Energy Centre. For tickets, click the show title or call 800-982-2787.

“A Catered Affair” runs through March 28th at Aurora Theatre. Fierstein attends the Friday, March 19 performance. For tickets, click the title of the show or call 678-226-6222.