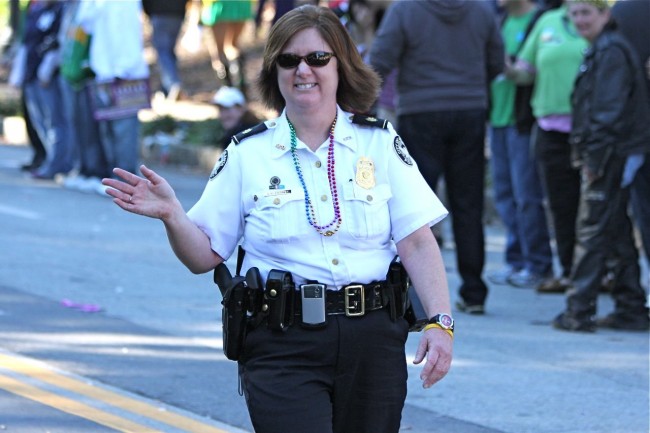 The Atlanta Police Department’s highest-ranking, openly-gay commander was sent packing to the airport, a move that prompted outrage from her supporters though little notice from LGBT activists.

Major Renee Propes, who marched alongside other gay and lesbian officers during the Atlanta Pride parade in November (photo), was shifted from her command of Zone 6 during a sweeping reorganization of the agency announced two weeks ago by Acting Chief Georgia Turner. She was moved to take charge of the department’s precinct at Hartsfield-Jackson International Airport.

Propes was one of several police commanders who defended the agency during a public forum in the wake of the Sept. 10 raid of the Atlanta Eagle.

Moving Propes to the airport from her command of Zone 6, which includes portions of gay-heavy Grant Park, Little Five Points, Edgewood and Kirkwood, was questioned by some residents during a public meeting and prompted City Council member Natalyn Archibong to ask Turner to delay the change. He declined.

“We believe it is too destabilizing to move Maj. (Renee) Propes,” City Councilwoman Natalyn Archibong said, speaking Wednesday night for several dozen residents from the police Zone 6 communities East Lake, Edgewood and Kirkwood at a meeting with police leaders.

“We ask that the decision be deferred at least six months, or until a permanent police chief be named.”

Turner said he could not meet the residents’ request.

“I’m not prepared to do that,” he told them.

Propes has earned the praise of many residents of Zone 6; even journalists tend to laud her as “an engaging, concerned, no-nonsense, smart, and notoriously hard-working officer.” That’s quite an endorsement for a top commander of an agency that’s seen little favorable press in the last few years.

But gay and lesbian residents have said little about Propes’ move or that Turner left in place Major Khirus Williams, who commands Zone 5. That Midtown district includes the Eagle.

Turner, though, also left in place Officer Dani Lee Harris, the department’s LGBT liaison for four years. He pledged to “tweak” how the position is integrated into ongoing investigations that impact gay and lesbian residents of the city.

The Atlanta Police Department was harshly criticized by some LGBT residents and questioned by elected officials and political candidates in the wake of the Eagle. Harris was not notified about the undercover investigation leading up to the raid and she learned of the raid and eight arrests the next morning from a reporter.

Patrons of the bar later joined a federal lawsuit against the department and the city while the eight men arrested during the raid await trial in Atlanta Municipal Court.