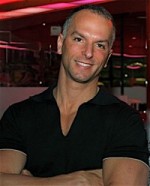 The last three weeks have been crazy good for business for Blur Thursdays at Halo. DJs battled in Centaur Music’s POPular DJ contest, and the winner spins a victory lap this week.

After a trial run in December, party promoter Chris Coleman (top photo) carried his re-invented Thursday Boyz Nite Out at Halo—with a different gimmick each week—to January, renaming it Blur. For this month, he teamed with Centaur to pit eight of the best local gay DJs against each other for the chance to record the next “POPular” CD.

“POPular” CDs, from the same folks that brought you the “Global Groove” series, celebrate dance mixes of today’s biggest radio hits, and each one features a fresh new gay DJ from different cities around the country. The Atlanta winner, who won’t be announced until the finale on Thursday, Jan. 28, then takes to the turntables for the night.

Audience response and online voting determined the victor, and to him go the spoils: His “POPular” CD, the fifth in the national series–officially releases on Feb. 23.

It all started Jan. 7, when Keith Mobley and Justin Ryan battled all night long. The 14th saw the face-off between Todd Skelton, Chris Griswold and Shane V. And on the 21st, Travis Roache, Mike Pope, Scott Anthony and Sean Mac went hour-for-hour, beat by beat. (Bottom photo: DJs in order of appearance, left to right, top to bottom)

Who’ll win? The patrons of Blur Thursdays, obviously! As for the DJ, guess you’ll have to show up at Blur on Thursday to find out.

And just because the POPular contest is over, Coleman doesn’t stop churning out the A-list ideas. In February, look for the Black Eyed Peas Afterparty on the 4th. On Feb. 11, in addition to the DJ, drinks and dudes, you can check out and enroll in the Atlanta Gay Sports Alliance leagues.

Coleman also brings you Two For One Tuesdays at Nonna Mia.