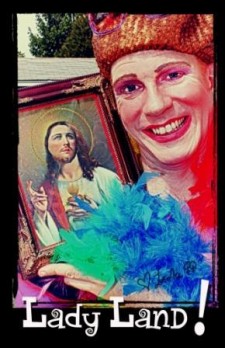 Fringe Fest goes down May 9-13 at multiple venues around town, and we’re starting to hear from the LGBT contingent. Nolan’s “Lady Land! The Coming Out ‘Reality Cabaret’ of a Jesus Loving, Senior Citizen, Redneck Lesbian Diva” runs May 10-12 at Little Five Points Community Center. It follows Nolan as his creation Leola (photo), who comes out of the closet at 72, exploring her newfound sexual identity and, well, her lady land. One part preacher, one part showgirl, one part reality show junkie, and a whole lotta heart, Leola takes her guests on a journey from heterosexuality to homosexuality. She’s a dancer that can’t sing and a singer that can’t dance. She’s simple and simply, Leola.

“It’s a little bit wrong, and a lot of fun,” Nolan says about the show as he prepares to head back to his hometown from New York for the performances. “I think LGBT people in Atlanta will really dig Lady Land! Leola decides to celebrate coming out by throwing herself a cabaret. It’s a lot of fun and the response here in NYC has been great.”

Miller, a self-identified “bisexual polyamorous woman,” brings her one-woman show “Threads: The True Story of an Indiana Farm Girl in Vietnam” to the festival at Core Dance in Decatur May 10-13. In August 1968, a farm girl from rural Indiana stepped off a plane in Saigon, Vietnam. The people and events that led her there and her subsequent adventures make for an extraordinary tale based on a series of interviews with the playwright’s mother. It’s not a war story; it’s a life story.