World AIDS Day not only marks an increased awareness as we get incrementally closer to conquering the disease, but it’s also the day Atlanta’s annual ARTvision online art sale begins its part in the fight.

ARTvision (Artists Reaching Through) is the brainchild of Will Pollock, a local gay writer, photographer and philanthropist who turned the personal tragedy of his aunt’s 2006 death into an inspired idea to do some good.

“She was a philanthropic leader in the Bay Area, and in her heyday was a big inspiration to me at a time when I wasn’t as aware as I am today,” Pollock says. “Her death woke me up to the power each of us has to make a difference in our own little world.”

Pollock (top photo, with one of his photographs up for grabs in this year’s sale) started ARTvision with works by four artists in 2006. This year, that spark has grown into a full-fledged fire that features a variety of artwork by more than 25 artists who donate their work so that 100 percent of the proceeds go to the beneficiary.

In 2008, that beneficiary permanently became Positive Impact, Atlanta’s mental health-focused agency that helps HIV-positive people deal with the multi-faceted psychological ramifications of living with the disease.

The partnership with Positive Impact is a natural fit for ARTvision, Pollock says.

“It’s just a tremendous organization,” he says. “They’re all just so committed to what they’re doing, and it’s palpable in their personas and everyday actions. But beyond the people, it’s such a great mission because folks are living longer, so it’s even more important now because they’re also living with the complications of it. 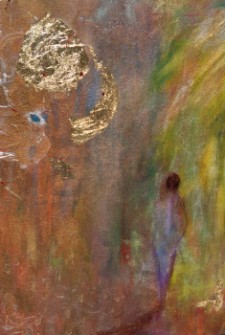 “What’s unique about this event is that it’s something Will Pollock created on his own that he can use to give back to the community, so it’s personal. It’s a way for people to connect with art and see what it can do for the greater good.”

With artwork ranging from $15 to $2,000, there are ample opportunities for most everyone to support not only the mission of Positive Impact, but emerging artists, too. And hint: the end-of-year timing is great for tax deductions as well.

A preview of some of the pieces in this year’s auction was on display at Positive Impact’s annual Parties with Impact last month, including the painting “Watching the Old Structures Crumble” (middle photo) by ARTvision returning artist Brenda Knosher.

New participants this year include local artist Calvin Lockwood, who offers the framed photograph “Lucy” (bottom photo), an example of the diversity of art available through ARTvision.

“The enthusiasm and support from the artists is unbelievable,” Pollock says. “I’m so humbled by what they do to promote the event and the value of their contributions.” 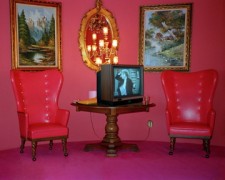 The ARTvision auction gets rolling today, and as the sales heat up, even more information on the works for sale and the individual artists will go on the ARTvision site.

We’ll offer this final bit of fair warning to potential buyers: your favorite may go fast. Last year, some paintings were snatched up early, so we recommend going now to check out the offerings and make the decision to buy that perfect piece for your own collection or as a holiday gift.

Not in the market for art this year? Online donations to Positive Impact are also accepted in the name of ARTvision. The art sale ends Dec. 31.