The organizers of MondoHomo Dirty South continue to build on their grassroots queer fest with this year’s Memorial Weekend alternaPride arts, culture and social justice fandango. Hold onto your hats.

It’s gonna be a takeover, babycakes. And you best be ready.

Well, if you consider “diversity” as gender, race, financial status and age variance, she’s probably right. Then throw in a four-day roster of DJs, drag, burlesque, politics, slam poetry, theater, dance parties and more disco, punk, hiphop and electro acts than you can handle, you pretty much have to cave to the fact that she and her people are ret-ta-go.

After pre-festival fundraisers like Wig Out (second and third photos; view more), the May Day Punkraiser, and the QueerStory Spaghetti Dinner with venue partners to entice patrons of the Eagle, Ria’s Bluebird, Woofs and Eyedrum, the group is ready to let it rip on its annual must-do roster of events.

Need more info on what it’s all about? Read the MondoHomo Manifesto.

So without further ado, here’s the rundown for the festival beginning Thursday and running through Monday. Pick and choose your poisons, or get a festival pass to everything for $25. Most events take place at Eyedrum Gallery unless otherwise noted, and many events are fa-fa-free! 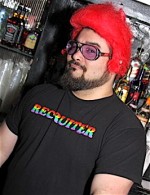 THURSDAY, MAY 27
MondoHomo’s Grand Opening
7 p.m., free
Mondo Art visual arts show (runs through June 26)?
This year’s participants were asked to respond to their city, be it where they were born, grew up, live now or aspire to be. The 2010 MondoHomo Art Show is curated by Donnie Reider.

The evening also includes “Gay: The Ride” This play promises that you will get wet. Written by Adam Fair and directed by Bridget Fancher, it features a cast full of local celeb drag queens and kings and beloved Mondohomies.

For even more details on the MondoHomo Dirty South Festival, visit mondohomo.com.