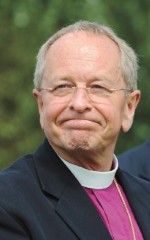 “The gay bishop” lands on the comforting campus of Emory University tonight as he ramps up his role in the debate over gay marriage.

Once a self-described preacher “from a hick diocese in New Hampshire,” Right Rev. V. Gene Robinson was thrown in a global storm in 2003 over his election as bishop of the state, making him the first openly gay bishop in the 2.4-million member Episcopal Church.

“There was no ramp-up time for all this,” Robinson recalled. “The day before this election, I was just Gene Robinson, some guy in a hick diocese in New Hampshire, and the next day I was on the front of every newspaper in the world.

The life of any bishop is incredibly full and takes a real toll on his or her family, and that is even more true for me because of this other public role that I’m playing,” he said. “Death threats are not fun, and they continue. Probably the hardest part has been that.””

Robinson comes to Emory’s law school to address the controversy splitting the Anglican Communion in an address called “Why Religion Matters in the Quest for Gay Civil Rights.” His talk, part of the school’s “When Law and Religion Meet” lecture series, is open to the public (and free). The event begins at 7:30 p.m. with a reception to follow where Robinson will sign his book, “In the Eye of the Storm.”

Robinson spoke to Southern Voice on the eve of his visit, offering a frank assessment of why gays can’t ignore religion. The Atlanta Journal-Constitution also previewed his local appearance.