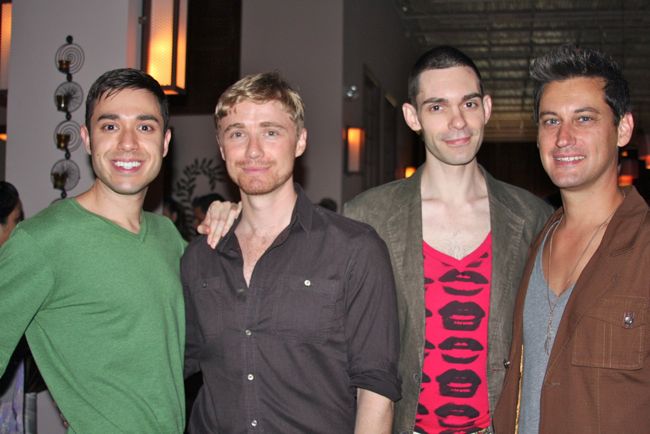 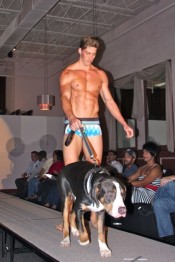 If you like cute guys in cute clothes with cute dogs, and you do, Sunday’s PALS Rubbing Noses fashion show delivered. Throw in some drag queens sporting runway fashions, and a gay old time was had by all. The annual runway event from Pets Are Loving Support (PALS) also included a silent auction to benefit to the beloved agency that helps critically ill people keep and care for their pets. This year’s Rubbing Noses went down at Lambert Place to a sea of supportive onlookers (top photo). All eyes were on hot looks from Boy Next Door – of both the fully clothed and the revealing swimsuit variety (second photo) – as some especially studly studs strutted the runway accompanied by PALS pooches. The agency’s longtime drag diva of doggie donations Bubba D. Licious, Nicole Paige Brooks (bottom photo) and Jasmine Antionette also sashayed down the catwalk in gowns by Lasting Impressions. 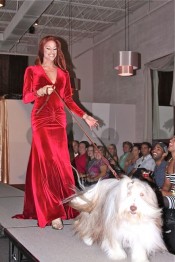 And of course, you can’t put a drag queen on stage without a couple of surprise performances that really made Rubbing Noses a fashion show like no other. Judging from the smiling faces and the $16,000 take for PALS programs, the formula proved a fashionable success. The silent auction featured more than 70 items up for bids and included dinner packages, weekend getaways and an autographed guitar from Grammy winners Collective Soul. For just $20, guests got the eye candy, the socializing, and an open bar to lubricate inhibitions and wallets for maximum donations. The event was again coordinated by fashionado Vincent Martinez, a PALS board member who also heads up Grady High School’s Urban Couture program, organizes the annual PALS Doggies On the Catwalk and designs for such charities as For The Kid in All of Us’ Project Prom. Photos by Sher Pruitt