‘Mo Media: What the gay pubs offer this week

After the Chandler Bearden lovefest in the last round of gay pubs – not that there’s anything wrong with that – the glossies turn to swimwear and the beach, while a paper spotlights community groups.

With that in mind, we offer another installment in our regular look at what Atlanta’s LGBT print pubs offer in their latest editions. It’s a crowded marketplace these days, and we aim to cut through the clutter.

But our new feature, ‘Mo Media, comes with this disclaimer: We don’t hold ourselves up as being the arbiter of all that is good and bad, so add your own critiques in the comments section below.

Between each batch of new pubs, stay up-to-date on the latest happenings in local gay media with our coverage.

PUB: Southern Voice, May 18, 32 pages
MONEY SHOT: The cover is a text-heavy, dull way to highlight the bulk of the issue’s content, which is a commendable focus on activists and community groups.
CONTENT: An update on the paper’s poorly-headlined “Oil-mageddon” coverage; launch of Atlanta AIDS Partnership; profiles of 10 LGBT activists and non-profits; a Q&A with drag personality Tyra Sanchez; a Q&A with “Project Runway’s” Anthony Williams; and a preview of “True Love Lies” at Horizon.
DIVERSITY QUOTIENT: A drag queen, a black gay fashionista, young LGBT activists and a new group focused on HIV among African-Americans. Now that’s a pretty diverse mix.
LOVED IT: The focus on local non-profits and activists, though the piece ends with a half-page item on the very non-local Give a Damn Campaign that’s pulled straight from the group’s website. Couldn’t the space be used for more local groups?
HATED IT: SoVo was last published on May 7 and was due again on May 14. But the paper never materialized and instead hit the streets on May 18 – a Tuesday, four days late. The issue includes a brief introductory note from its two associate editors, but they don’t address the publication delay. It continues the paper’s inconsistent publication schedule, which can’t please readers or advertisers. When can we expect a new issue? Who knows? The typos are also quickly moving past amusing – “Shit Off My Back Campaign” in the table of contents; “forcast” in a full-page ad – and becoming tedious. But it could be the start of a new drinking game – take a shot when you find a typo.
Q FACTOR: The paper continues to churn out a product, though it doesn’t stick to a publication schedule. Even before the May 14 issue turned into the May 18 issue, the paper often didn’t materialize until a day or more after it was scheduled. A full-page add for yet another publication from their new owners Gaydar – re-birthing the Eclipse nameplate that SoVo published several years ago under its former owners before they bought David – says to expect it as an insert in the May 27 edition of SoVo. But that’s Thursday, when the company has said SoVo is due on Fridays, after initially saying Wednesdays. Confused? Us, too. 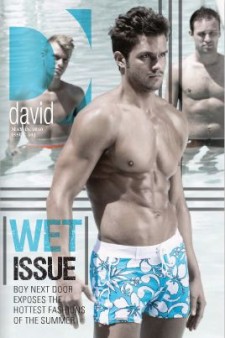 PUB: David, May 19, 100 pages
MONEY SHOT: Three hunky models complete with swimsuits in a pool for the “Wet Issue.” Our favorite cover since the magazine’s new owners took over.
CONTENT: A 16-page swimwear fashion spread; Michael Jeffrey’s “Essentially Major” column; “Brent Star report”; dance tracks to have poolside; tips for cheap dates; an interview with a former Atlantan who is launching a lesbian porn line; and pics from Blake’s, Tripps, Bellissima, Woofs and Chaparral.
DIVERSITY QUOTIENT: The swimwear spread includes two black models, their roster of columns includes authors of color, and their bar photos offer a variety of skin tones. For its gay glossy niche, David offers the most diversity.
LOVED IT: Bitch Session is back, baby. It disappeared in the May 12 issue, but it’s back and we’re thankful for that. You know we like us some snark. The issue, a thick 100 pages, is the magazine’s largest under its new owner Gaydar.
HATED IT: For those who like the Latin guys, but don’t speak fluent Spanish, how about an English translation of “la nota rosa.” Also, while we enjoyed the swimwear fashion spread, it jumps from place to place in the magazine with no direction on whether we’ve seen it all or there are more pages further back in the pub. A few “continued on…” markers would make it easier to navigate.
Q FACTOR: While Gaydar struggles with SoVo, it’s sharpening its skills with David. But like SoVo, it suffers from production issues, including typos – “marking & promotions” in the staff box; “forcast” in a full-page ad. But we were quickly distracted from those by the excellent shots in the fashion spread. Did we say wet and stuffed swimsuits? 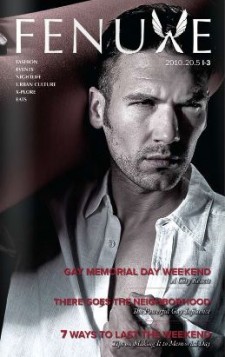 PUB: Fenuxe, May 20, 48 pages
MONEY SHOT: A sultry model to tease the “Leisure” fashion spread inside.
CONTENT: Q&A with Joe Gauthreaux; must-have beach accessories; ways to last the long holiday weekend without overdoing it; “Flashing Lights” from Blake’s and Burkhart’s; things to do if you’re in Pensacola but not on the beach; a Pensacola nightlife guide; a six-page spread of leisure wear for the girls and guys; and a preview of the weekend in the Redneck Riviera that turns ever-so-gay for Memorial Day. For you queens staying put in Atlanta, there’s some events in there for you, too.
DIVERSITY QUOTIENT: Cover model Jason, who is also in the fashion spread, is white, but does appear to be a bit older. He is, though, paired with a woman in the spread. The bar pics include various genders and colors.
LOVED IT: Fenuxe combats its every-other-week publishing schedule by focusing each issue on a theme. Fitness was carried through in the May 6 edition and this time, it’s a guide to Memorial Day and a leisurely holiday weekend. The idea is weaved through most every feature in the pub, making it a cohesive read and showing that a well-thought plan can really be an asset. If you’re heading to Pensacola this weekend, it’s a must read. Including Project Q in their crossword puzzle (11 Down) was a nice touch, too.
HATED IT: If you’re not heading to Pensacola this weekend, or splashing about in a pool, there’s not much that will speak to you.
Q FACTOR: It’s the most thorough and well-executed planner for the gays who beach this holiday weekend. And while most every pub we’ve reviewed in the last few weeks has attempted it, Fenuxe delivers in a way they didn’t. 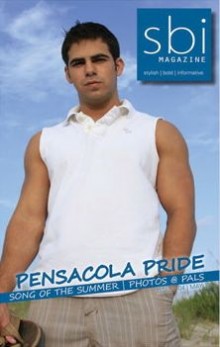 PUB: sbi, May 19, 32 pages
MONEY SHOT: Cute guy in a sleeveless shirt standing on what appears to be a beach. It’s the “Pensacola Pride” issue, after all.
CONTENT: A look at the Memorial Day Weekend in Pensacola, which is cleverly named “Pensacola Pride”; a Q&A with Kristine W, Veronica, Leah Driscoll and Kim Davis; a preview of MondoHomo; and pics from PALS Bingo, New Order and Blake’s.
DIVERSITY QUOTIENT: If pics of drag queens count for diversity, then sbi is covered. But otherwise, it’s keeping it white like last week.
LOVED IT: A big focus is the big gay holiday, otherwise known as Memorial Day. And we like the excuse to blow off work and daydream about our trip.
HATED IT: Orange is not a color that should be used for any font. But sbi’s feature on “Pensacola Pride” has orange type on a busy background and it’s nearly impossible to read.
Q FACTOR: It’s a quick and easy read that provides a few chuckles with its the Best of Social Media feature.