‘Mistakes made’ in gay attack on gay beating vic 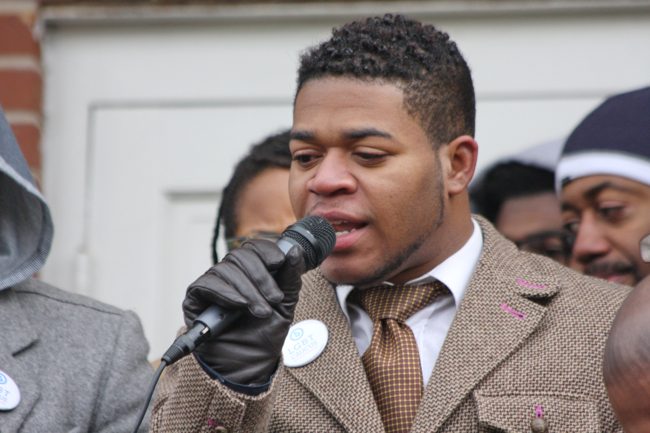 READ MORE | A second apology of sorts in Atlanta gay beating READ MORE | CBS affiliate's new game: Blame the Gay Victim Activist whiplash sufferer Devin Barrington-Ward, sensing that he and his Change Atlanta jumped the shark in attacking a gay man who was beaten days after they supported him, is now eating crow, mea culpa style. Those allegations he and others leveled at Brandon White about his knowing the attackers and blackmailing them, provoking the attack? Woops, sorry! It was all just a misunderstanding. Mistakes were made.

At the ripe age of 21, I am learning that part of being a community leader is taking responsibility when you were wrong and even gave the appearance that you acted outside of the best interest of those who look to you to lead. I never promised I would be perfect, or have all of the answers, however I did make a promise to myself that when I have done wrong I will do my best to make it right. Beloved Community work with me, as I work to make what has been deemed a wrong right on my part a right again. To Mr. White know that I am sorry for any hurt I may have personally caused, whether you knew them or not you were attacked and justice for you and healing for all communities affected is all that matters. I am a young man and a leader in development, who is learning lessons daily.

whether he knew them or not a crime indeed was committed, so there is not really much else to talk about. Mistakes were made on my part and on the part of others now its time to move onto what is important which is addressing the systemic issue of violence and the contributing factors of violence, especially violence in the Black Community. Those factors are high unemployment, broken family structures, uncontrollable crime rates, lack of education and social polices that keep communities in these perpetual cycles of depression. Thank you for your comments and perspective.

Let’s recap for those arm chair critics watching at home. On Feb. 4, White is attacked, beaten and repeatedly called “faggot” as he left a grocery store in Southwest Atlanta. The attack from alleged gang members is recorded and posted online. On Feb. 7, Barrington-Ward (photo) is among organizers of a public meeting at the Rush Center to discuss the case and plans to hold a rally to support White. On Feb. 8, Barrington-Ward and other Change Atlanta members stand behind White during an emotional press conference that gained national attention. White called his attackers “monsters.” On Feb. 11, some 150 people rally on church steps across from the store where White was attacked. Barrington-Ward again takes center stage to support White. On Feb. 22, Barrington-Ward, Change Atlanta members and other LGBT activists meet with the attorney and mother of one of three men arrested in the beating. They call White a liar and say he knew some of the men before the attack, provoking them by threatening to out them as gay. “Brandon needs to come forward and make his wrong right,” Barrington-Ward tells CBS Atlanta. On Feb. 24, Change Atlanta, sensing a growing LGBT backlash over their accusations lobbed at White, starts to walk their statements back.

Let me be clear: CHANGE ATLANTA is NOT making a villain out of Brandon White, however it is VERY important to the community that supports us that we offer them truth in action. We are setting precedence for truth in our community. If you are hurting or have been hurt, we will support your truth! Without regard to how embarrassing it may appear. Truth is a prerequisite to healing. We cannot continue to seek healing from the same system that hurts us. To do so would be the epitome of insanity. The Georgia criminal justice system is BROKEN and cannot fix us emotionally, financially or socially! We are the beloved community that is responsible for our own. Let truth guide us to healing.

On Feb. 25, Barrington-Ward, Change Atlanta and others host a public meeting and press conference at the Rush Center to further their attacks on White and provide a platform for the same attorney and mother of the suspect they met with earlier in the week for their continued attempts to undercut the case and the potential federal hate crime charge that comes with it. On Feb. 28, Barrington-Ward, facing mounting flak from LGBT critics over his attacks on White, relents. Mea culpa time.