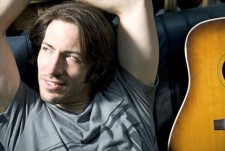 The mother of Steven Marchi, an Atlanta musician who moonlighted as a masseur and BJ Roosters dancer and has been missing since August, says that the discovery of his truck in Texas doesn’t quell her fears of the worst. Marchi (photo) was last seen by his roommate on Aug. 12 leaving his DeKalb County apartment, and friends reported him missing on Aug. 22. His green Dodge pickup was impounded a month ago at a WalMart in Gainesville, Texas, but it wasn’t until an impound ticket was sent to a friend’s address that the first real lead in the case appeared. Texas police are sharing surveillance footage from the WalMart parking lot and evidence from the truck with DeKalb police in hopes of finding clues to Marchi’s disappearance. A musician who has played such spots as Red Light Café, Smith’s Olde Bar and Eddie’s Attic, Marchi was saving up to record his first CD. Though police have found no evidence locally, his mother tells the AJC that she suspects foul play, possibly stemming from an argument at BJ Roosters.

"I don't think he's alive," the man's mother told The Atlanta Journal-Constitution in a phone interview from her home in Michigan's Upper Peninsula. "I really don't." [Friends] are convinced he didn't leave on his own accord, noting that Marchi's cell phone and guitar were found in his townhouse. "He was never without his guitar," said his mother, who worries he may have met with trouble working one of his side jobs. Ginger Marchi said her son told friends about a confrontation he had with a customer at B.J. Roosters, a Cheshire Bridge Road gay bar where the 43-year-old troubadour occasionally performed as a dancer. "I think he was lured by someone," Ginger Marchi said. Her son was naive, she said -- "a Peter Pan who never grew up." Steven Marchi also worked as a freelance massage therapist treating clients in their homes. Kelly Hagen, a friend of Marchi's, said she thinks "something weird happened" en route to an appointment.

Friends have set up a Facebook page to track developments in the case. Photo via Examiner