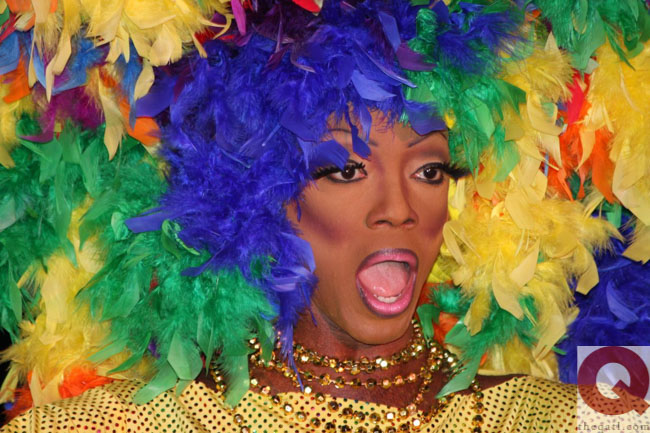 After nearly a decade’s absence from the roster of Pride season events, the Miss Atlanta Pride Pageant makes a long-awaited return on Sunday.

Midtown Tavern is scheduled to play host, and there’s a boatload of prizes in store. Among other honors, the winner gets to do the (drag) queen’s wave while riding in a convertible during the Atlanta Pride parade on Oct. 14.

“It was an event that was expensive and difficult to run, and people had lost interest in the community, so we stopped having that in favor of other programming,” she said. “For the last year or so, we’ve heard more interest.”

Local drag entertainer Celeste Holmes and her husband, Billy Ledford, organized the last Miss Atlanta Pride pageant in 2009 (photo). They were approached about the idea of bringing it back by Keith Young, co-owner of after hour event series Xion and Midtown Tavern. Young is also a partner in the venture to bring a gay dance club at Underground Atlanta called Future.

“It was Keith’s idea, and we just jumped in and said we would help,” Holmes said.

“Celeste and some other folks said that they’d be happy to produce it, so we said great, let’s give it a try,” Fergerson said. “We want to be proactive when we can, but if we don’t fully anticipate what people want, we want to be really responsive and say, ‘Hey, people want this and there’s some resources to do it. Absolutely, let’s give it a try.’”

Contestants for the title will be judged in three categories: Pride presentation, talent and evening gown. The winner walks away with a crown, $500 cash, a spot in the Atlanta Pride parade, a photo shoot with local photographer Just Toby, a gift certificate for a wig by Jonathan Nieves, a spot in the Shooting Stars Cabaret in Piedmont Park during Atlanta Pride, and a cast slot in Holmes’ drag show at Midtown Tavern right after the pageant.

But the pageant benefits more than the winner.

“Everything is to benefit Pride, other than the prize money that goes to the winner,” Holmes said. “It goes to help keeping Pride free for the weekend.”

Holmes is counting down the days to the Sept. 30 event.

“I’m excited for it to be back, because Atlanta Pride is one of the largest in the country,” she said. “It’s definitely the mecca for the South. To have a Miss Atlanta Pride Pageant and have someone represent Atlanta Pride all year long at events is going to add to the cache of what Atlanta Pride is and will expand the audience even further.”

This story originally appeared in Q magazine. Read the full issue below, and pick up a new edition each week.