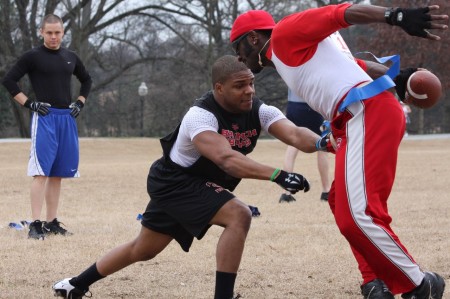 The National Flag Football League of Atlanta held its mini-camp on the park’s athletic fields to meet and greet new players, potential recruits and returning veterans in advance of the gay league’s April 18 start. Team captains and league officials ran players through drills on passing, blocking and snatching the flags off an opponent during the two-hour session. The league wants to boost its rosters to nearly 100 players.

The league officially opens its spring season next month, but starts practice March 21 and holds preseason games March 28 and April 4.

View the Project Q Atlanta photo album from the event. Registration, which costs $60, is open until March 22.