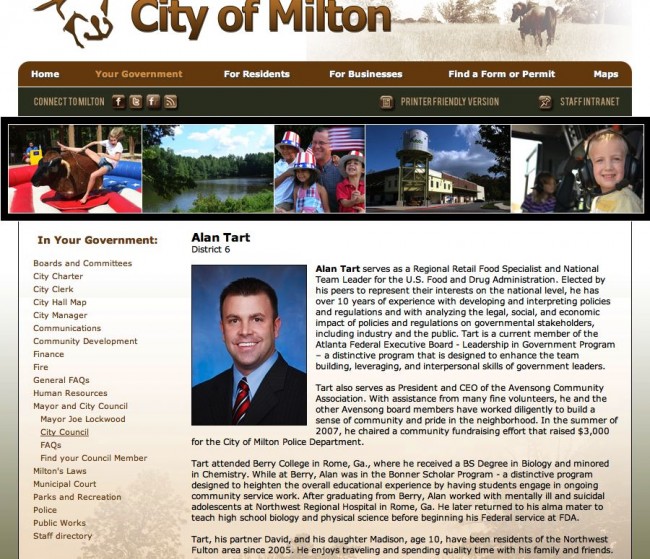 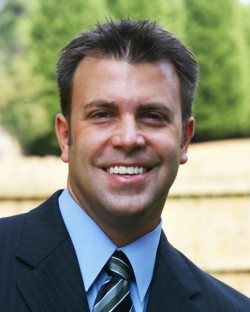 Tart, a regional retail food specialist for the U.S. Food & Drug Administration, ousted an incumbent in 2007 to join the Milton City Council as the District 6 representative. He shunned LGBT political groups in the process, choosing not to seek an endorsement from Georgia Equality and the Gay & Lesbian Victory Fund.

But when he took office, his biography (top image) on the north Fulton city’s website included this nugget: “Tart, his partner David, and his daughter Madison, age 10, have been residents of the Northwest Fulton area since 2005. He enjoys traveling and spending quality time with his family and friends.”

Tart’s sexual orientation – and his unique status as a gay elected official in a conservative suburb – went unnoticed in the 2007 elections and is similar to the approach used by Johnny Sinclair, a gay man who has won election to the Marietta City Council three times but has also shunned gay support.

But not this election cycle. On Wednesday, the Atlanta Progressive News reported that Tart is gay and has avoided any media outlets asking about it.

Tart’s sexual orientation did surface in the 2007 race and prompted him to address it on his campaign website, according to APN.

“Dear Citizens of Milton: Despite the lies and mischaracterizations that are being used by my opponent and his group of supporters to attempt to derail my campaign… I would like to set the record straight…My orientation has nothing to do with my ability to serve your interests on city council. I have been completely open and honest with the citizens of Milton from the very beginning.”

Jeff Graham, Georgia Equality’s executive director and a veteran LGBT activist, told Project Q Atlanta in March that he hadn’t heard about Tart or worked with him.

“It certainly speaks to the growing integration of gay and lesbian and transgender people in our society when folks are able to run and hold public office without it being a big deal,” Graham said. “That is certainly the future world that all of us can hope to see. I am proud of him as an openly gay man for seeking office. Knowing that he is there, I certainly hope that we can reach out to him and find out about him and perhaps support him and work with him in the future if that’s something he’s interested in.”