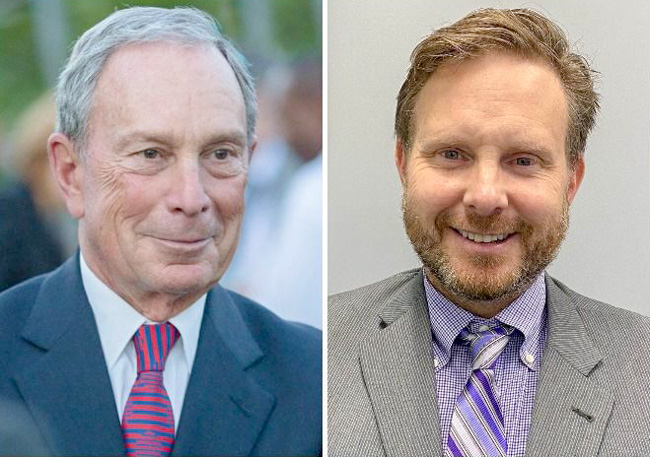 Gay Atlanta politico Lance Orchid was also hired to run Bloomberg’s campaign in Georgia. Orchid is hiring campaign staff and opening at least eight field offices across the state in advance of the March 24 presidential primary.

“We’re ultimately going to have 50 organizers and about 18 senior staff, so close to 70 staffers here in Georgia,” he told Project Q Atlanta.

Orchid (photo right) said it was important to him that the campaign’s Atlanta headquarters be in Midtown.

“I really do believe this is a campaign about unity,” he said. “Midtown is the place that is open for everyone in the city and provides a tolerant accepting community, but also geographically it’s easier to get to.”

“Being a gay man, I like that’s we’re in Midtown because I think it says a lot about what the campaign thinks about this community,” he added.

The campaign unveiled a LGBTQ platform from its Atlantic Station headquarters on Feb. 1. Bloomberg supports the Equality Act, called for law enforcement training to protect transgender people of color, wants a federal ban on conversion therapy and wants to overturn HIV criminalization laws.

“I love that when they went out to build this policy, they went to communities within our LGBTQ community – like transgender people of color – about what is missing for them,” Orchid said. “They built the plan based on those conversations.”

“I just believe that whatever he’s putting out there is something he’s going to put the resources into to make happen,” he added.

Orchid took a leave of absence as chief of staff for Atlanta City Councilmember Jennifer Ide. He’s agreed to serve on Bloomberg’s campaign through the March primary.

Pete Buttigieg beat all other Democratic presidential candidates in fundraising in Georgia in 2019. He raised $750,000, which topped former Vice President Joe Biden by $100,000.