Should we starve shallowness out of gay life? 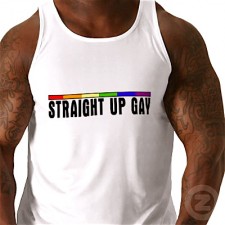 “He’s hot,” I thought as I rifled through a local magazine. But my panting turned to laughing when I saw it was a friend posing in the shirtless shots.

Coleman (his name is changed to protect his guilt) appeared as a cover-boy in what can only be described as the cheese-whiz in the platter of local gay magazines–the type of bar rag that assaults you over and over and over again with a constant barrage of muscled images in a relentless in-your-face, smell-my-lats hard-bodied over-kill.

The kind I can’t get enough of.

Coleman is a grounded, serious, career-minded 22 year old. The kind of guy who takes notes when you talk to him. You could almost call him uptight. So when I saw him oiled up and loaded for bare in a mock playmate-of-the-month spread, I could only think of two things: Why in the world would he take most of his clothes off for a soft-core magazine and does he sleep with columnists?

“I’d never do it,” said a friend. Not about sleeping with me–about gracing the cover of a skin rag. This wasn’t sour grapes on my friend’s part. He could easily appear on the cover of any man-mag.

He wouldn’t do it, he said, because he’d just be adding to the shallowness of gay life he finds so offensive. I knew what he meant. The gay sensibility has laid some pretty perverted social tracks, railroading us into thinking beauty is the only currency worth exchanging.

As my friend pointed out, there are thousands of guys who will look at Coleman as if he actually accomplished something by appearing on the cover of a magazine devoted to putting people like Coleman on its cover. This kind of circular back-slapping showcases a sorry principle of gay life: Get people to look at you.

Let’s face it, we live in a culture where wisdom, accomplishment, even wealth gets stomped on like a champagne glass at a Jewish wedding.

Ours is a culture that purrs over beauty and hisses at anything else. Who do you think most gay men would prefer as the guest of honor at their party–Bill Gates or Chace Crawford? Windows will never gain share in a market dominated by Mirrors.

Beauty has a ferocious gravitational pull in gay life and in many ways it diminishes us. Beauty can never be in the service of anything but itself. Even money, that root of all evil, has more positive applications than beauty. You can waste your life chasing either one but at least if you catch money you can do something with it–like build a new hospital or develop a new vaccine.

Should gay bar rags that “exploit” the male physique exist? My friend says no but, oddly, I disagree. That’s because I think it’s important to celebrate beauty. We’re enriched by beauty and we should strive for it in every area of our lives.

Gay bar rags play a valuable role in the totality of the gay experience. You want to get informed? Read the gay paper. Want to get, ahem, excited? Read a bar rag. Want to get entertained? Read the alternative newspaper. Why shouldn’t we have a choice?

I do not believe we have to give up admiring beauty in order to starve the shallowness out of gay life. Given the choice between going home with Chace Crawford or having dinner with Bill Gates, I’d take Crawford home early and meet Gates later for drinks. I never believe in “or” when “and” will do.

We should not be afraid of our sensuality, we should revel in it. But reveling doesn’t mean enshrining it, either. In the tapestry of gay life, beauty should thread its way through the pattern without ever becoming its purpose.

This column originally appeared on the Huffington Post. Project Q contributing blogger Mike Alvear is an Atlanta-based columnist, author and TV personality who writes our Need Wood? sex advice column each Wednesday. Download his latest ebook, “Meet The Hottie In The Corner: The 21-Day Plan To Overcome Your Fear of Rejection, Master the Art of Icebreakers and Snag Guys You Never Thought You Could Get.”