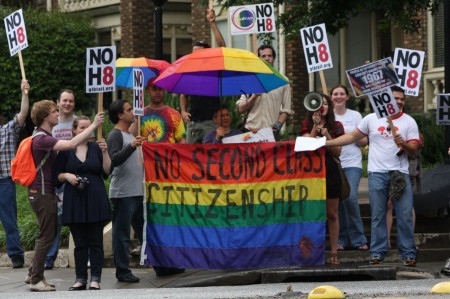 About 75 people armed with signs and some with whistles took to the streets of Midtown on Tuesday to protest a ruling that upheld a ban on same-sex unions in California.

The 6-1 decision from the California Supreme Court upholding the voter-approved Proposition 8, announced earlier in the day, spurred nearly 100 protests across the U.S. as part of Day of Decision.

Though some of the events resulted in scores of arrests, the 75 or so people that gathered at the 14th Street entrance to Piedmont Park Tuesday evening just chanted, blew whistles and carried signs as they paced around the intersection with Piedmont Avenue in the crosswalk.

“The decision in California to uphold Proposition 8 encouraged me to come out and become part of the community and show my disbelief in the system,” says Angel Poventud, a longtime human rights activist who joined the event.

The local protest, which moved along Piedmont between 10th and 14th streets, was organized by GLBT ATL, a grassroots group that grew out of protests over Proposition 8 late last year.

“It is unjust, it is unfair. But don’t despair. The dark cloud always has a silver lining,” organizer Adam May told the crowd. “We have to stand up here.”