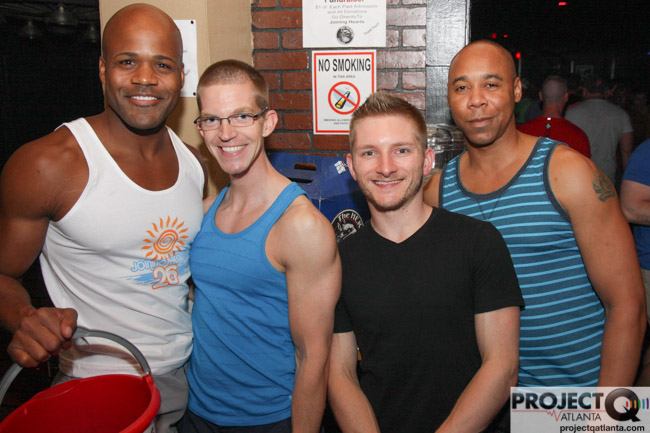 DJ Micky Friedmann is best ogled in person. Sure, we've put his man hotness on display in the Morning Fix. But a crowded Heretic got the chance on Friday to see him face-to-face and hear his talents in the DJ booth.

Friedmann hit Atlanta to kick-off a sexy Joining Hearts Weekend of boys, booze and charity fundraising. His gig on Friday returned him to the Heretic, where he helped the gay Atlanta nightlife mainstay celebrate its 21st anniversary in December. Before that, Friedmann was in town for the Peach Party in June 2012.

Friedmann found time for some fun during his trip, too, joining Isaac Escalante — the DJ who powered the weekend's closing party on Sunday at Jungle — for a Lenox Mall lunch on Saturday. Both men chummed around the Joining Hearts main event on Saturday with Heretic General Manager Alan Collins, and he joined Escalante and sexy calendar guy (and current Atlantan) Rodiney Santiago for Jungle's Joining Hearts after party.