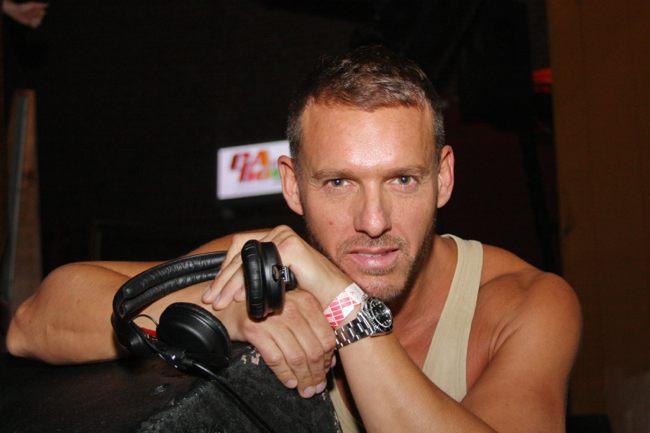 Even in winter, you’re going to need a fan for the gay heat of Heretic’s anniversary weekend. Maybe two fans when Saturday’s main event steams up your windows with the return of Atlanta favorite DJ Micky Friedmann.

The Israeli-born, Berlin-residing, globe-trotting sex symbol is no stranger to Atlanta’s gay dancing queens. Friedmann (photo) was last here as part of the marathon Peach Party Weekend in June and turned right around with a July Beach Blast benefiting Joining Hearts. He also started our year off right at Heretic’s New Year’s Eve party. In general, we ogle Friedmann’s manhot frequently.

The admiration is mutual, Friedmann says.

“Atlanta is one of my favorite spots to spin at, whether at the big room of Jungle or the more intimate Heretic,” Friedmann tells us. “I have quite a few friends which I’m looking forward to seeing again. I call them my Atlanta family. I know my good friends [Heretic’s] Alan and Ray are planning to take me to the Christmas market at Stone Mountain. Good food, some shopping and quality time with friends.

“The Atlanta audience is open to new sound, and they are cowboy hot,” he adds. “I’m planning an upbeat, sexy and very energetic set for you guys.”

That’s perfect, because it’s exactly what local fans want when the bar turns 21 this weekend. Friday gets the anniversary weekend started with Atlanta Bucks “Buck Wild” bar night at 8 p.m., followed by DJ Lydia Prim pumping the beats at 10 p.m.

On Saturday, the Best Gay Things to Do in Atlanta this Weekend include first the Armorettes: A Christmas Story show benefiting the Health Initiative. Then make room for Friedmann, who we had to talk to again after he squeezed our Georgia peaches last time. Here’s how he teased us in advance of the bar’s big birthday bash.

What have you been up to since your two visits this summer?
This summer was crazy. I have been going on strong every weekend since, looking forward for some free days in January. Matinee circuit festival in Barcelona was even bigger and better than years before. Always fun playing at that event as one of the residents. Pride Toronto was huge this year, too.

I have been touring around the globe to Taiwan, Hong Kong, Taipei, Boston, Ptown, Madrid, Prague, Paris, Rome, Milan, Vienna, Zurich and of course various cities in Germany all since my last visit to Atlanta.

My new remix of Rebeka Brown & Carlos Gallardo, together with Alex Botar just came out, and we are working on a new 2013 remix for Ivan Gomez’s “You Drive Me Crazy.” Ivan and I just finished a new original track called “Never Let the Party Stop” to be released just before the Carnaval season in February.

Heretic has been around since some of its customers were born. As an outsider, what do you think keeps people going to a club for so long?
The Heretic has a more rough masculine touch, which I love. The energy is very sexy. I find the people in Atlanta very friendly in general. Maybe it’s the southern touch which keeps people more simple and down to earth. I love that! No attitude and no pretentiousness.

At the Heretic, the staff is friendly, sound is good, the room is a bit dark which gives the people a chance to get closer to each other.

Your music definitely brings an upbeat European flare to a different scene here in the states. How does that set you apart, and how to you adjust?
That’s a great question. The North American party crowd is exposed to a very tribal sound. However in these days of rapid Internet communication, DJs have the ability to reach all kinds of music genres with one simple click.

The challenge is to read the crowd and spice the set up in a way which will still serve an exotic new sound combined with the vibe people expect to hear.

You’re known as somewhat of a sex symbol. Does this help or hurt your career? Do you use it to your advantage, or is it just part of the job?
I was once asked if I believed I would have become so successful if I was ugly and obese. The answer is no. The one and only most important thing is talent. If you have it, there is no harm in using any tool for better promotion or marketing.

Anything else you’d like to say to your Atlanta fans before Saturday night?
Just a very happy birthday to the Heretic. Many happy returns and wishes for 21 more years of success and great parties.

Speaking of great parties, Heretic’s private 21st anniversary party goes down on Monday. You can’t get in for food, drinks, music and photos with Santa without an invitation, but it’s yours from any bartender if you ask nicely on Saturday night.