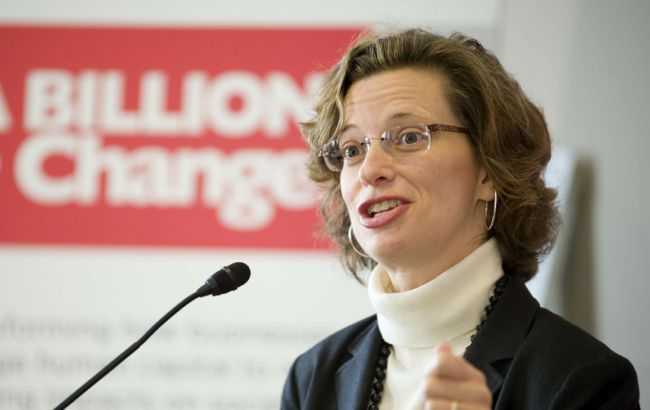 Democratic Senate hopeful Michelle Nunn wants to raise $300,000 from LGBT supporters and target gay politicos to boost her campaign, despite not backing same-sex marriage as a candidate.

The strategy to recruit gay donors and supporters is outlined in a 144-page internal campaign document first published Monday by the National Review. The document also shows that Nunn's public position on gay marriage differs from what campaign strategists hoped to make public.

· Opportunity: Michelle’s positions on gay marriage and the HRC endorsement provide a huge opportunity for mobilizing this community and their substantial resources.

· Message: I believe everyone has the right to enjoy the commitments and benefit of marriage to the person they love. This is not a position shared by my opponents, so I hope you’ll join me on this journey and lend me your full support so we can win this race.

The gay marriage message political strategists advocated in the memo is quite differant than the nuanced one Nunn has offered since launching her campaign last year.

How she framed it with the AJC:

And later in a statement to WVTM:

In the campaign document, gay marriage is included in a laundry list of issues the campaign considers a vulnerability for Nunn.

The Research team will produce a “pushback” document for each identified vulnerability in Michelle's record, as well as common attacks frequently leveled against Democratic Senate candidates.

These will be prepared as early as possible and will serve as the basis for our response when attacks are leveled against Michelle. Some, such as the document relating to Michelle's conservation easements, are complex and lengthy; while others will be short “fact checks” pushing back against common distortions (e.g. “Obamacare cut $500 billion from Medicare).

Within our raiser program, we see some specific audiences emerging as “affinity groups” that should be targeted because of their specific issues and particular connection to Michelle. In many of these groups, we have existing “anchors” who can help raise money from these constituencies. They are detailed below to illustrate the specific opportunities, messaging, and goals that are evolving and will be reached through a variety of fundraising tools.

The document, written in December, says the campaign is already meeting with gay supporters “to identify the best way to engage.” It includes a list of 19 people to target as LGBT volunteers, including Tim Cairl, chair of Georgia Stonewall Democrats; Suzanne Baugh, board member of Atlanta Gay & Lesbian Chamber of Commerce; Jeff Graham, executive director of Georgia Equality; Lee Schreter, board chair of Littler Mendelson; Georgia House candidate Bob Gibeling; and Reese McCranie, a former spokesperson for Mayor Kasim Reed who is now deputy communications director for Hartsfield-Jackson International Airport.

The campaign memo also recommends organizing activities around LGBT History Month in October, though there are seldom any public events commemorating the month in Atlanta. The document fails to note Atlanta Pride and Out on Film also take place that month.